When games are developed for advertising reasons, they have a strong tendency to suffer in quality, putting brand names and mascots before all else. The likes of Cool Spot, Chex Quest and Yo! Noid have become renown for their bizarre premises, in some cases being up front with their promotional interests, using brand mascots as protagonists and often using real-world food items as health pickups. In other cases, such as in 2002’s Darkened Skye, which made use of a strange magic system based on Skittles sweets, the use of branded items takes a back seat, not integral to the game but prominent enough that it’s impossible to avoid the branding from getting into your head. More recently, this is something that even Nintendo themselves have dabbled in, filling Chibi-Robo! Zip Lash with a plentitude of real-world confectionary as collectables (which, as a European player, was a little disorientating due to the use of many US-exclusive brands).

Motoko-chan no Wonder Kitchen exists for a similar reason; to market a product, in this case, Ajinomoto-brand mayonnaise (with Ajinomoto being a large producer of various foodstuffs such as seasonings and cooking oils). It was, like several other games featured in You’ve Probably Never Played, a game released on a limited print run, with 10,000 units available for those who entered a lottery by mailing in two proof-of-purchase coupons from Ajinomoto mayonnaise. The game’s title makes the premise seem fairly simple to any onlooker – it’s just a generic cooking game that uses Ajinomoto mayonnaise, right? Whilst this stands partially true, you may be surprised to hear that the actual cooking makes up only a tiny fraction of the game, the rest being made up by a strange, confusing and incredibly unique point-and-click that, whilst brief in duration, is a very interesting for the sheer unexpectedness of its premise.

The titular Motoko-chan only makes several brief appearances throughout the game, introducing you to her ‘Wonder Kitchen’ which serves as the portal to various magical realms. You read that right, this little girl’s kitchen is a culinary gateway to a variety of locations spread across a fantasy island, each area containing the ingredients needed to create three dishes, each one containing mayonnaise. Ajinomoto mayonnaise, naturally. Before you can proceed around the island, you’ll need to collect three ‘memos’, each serving as ingredient lists, provided to you by a… trio of seemingly-stuffed animals? Regardless, these lists are crucial in obtaining the pieces needed to put together your delights and there’s a hell of a journey ahead of you if you want to find them! Oh Motoko-chan, what lengths will you go for the sake of mayonnaise. Sorry, Ajinomoto mayonnaise.

Whilst first impressions may suggest that the kitchen is hardly out of the ordinary, it’s residence would say otherwise. Almost everything can be interacted with, from the utensils on the wall to the taps and light switch, but many of the responses you’ll get from different items are less than conventional; select the panna cotta in the fridge with your cursor (which can be controlled with both the d-pad and the SNES Mouse, making this one of the few games to support it) and it’ll leap onto the table, transform into a ballet dancer, give you a few pirouettes before disappearing into the painting hanging on the back wall. When clicked on, the six sausages on the table will get up, perform a strange ritual dance, before transforming into gnomes and doing a runner. Open and climb inside the cupboard under the sink and you’ll find yourself transported into the bedroom of a sleeping witch, who’ll happily challenge you to a game of Othello. These things don’t make a lick sense, but they’ve gotta be done to achieve culinary perfection and they really do add to the charm of this game; it’s just so inexplicably bizarre.

Said game of Othello offers a minor distraction from the game’s main ‘quest’, although you’ll undoubtedly be quite surprised if you stumble upon this rather fantastical location by pure chance. In fact, little time is spent in the titular kitchen; you’ll find yourself whisked away to a plethora of mysterious locales, such a castle in the clouds, the bottom of the ocean and the plains of Africa, just to name a few. Interaction is key, so you’ll want to select every object in your sight, regardless of whether or not it appears as if it would conceal anything; witnessing the likes of the cannon of a pirate’s ship blasting a cabbage or seeing a circus acrobatics ball transform almost supernaturally into an orange is quite the spectacle. Whilst all of these mysterious and seemingly unconnected occurrences offer both a comedic and unique experience, it has to be said that the average young player is unlikely to see the link between an umbrella on the bow of a galleon to a can of sweetcorn. In other ways the encouragement of exploration is commendable; after all, this is a game based around mayonnaise, so it’s hardly simple to go in with any particular expectations.

Once you’ve acquired everything you need to make your dish, you’ll be congratulated with a fact about the history of mayonnaise! Of course, the game’s language barrier will make this difficult for some to appreciate, but you’ll be given information both on the origins of the condiment and some more specifically on Ajinomoto-brand such as statistics and opinion poll figures of a completely undeterminable reliability. Did you know that Ajinomoto mayonnaise makes up 70% of the mayonnaise purchased in Japan? Well, it did back in 1993, according to Ajinomoto. These little facts still make for a fun touch, separating the title’s two main gameplay styles and offering an interesting product tie-in that’s less explicit that your ordinary mascot shoehorn.

Now of course, what good is owning a ‘Wonder Kitchen’ if you don’t use it for any cooking? Surprisingly not the main event, the game’s cooking sections are simple and fun, albeit a tad confusing if you’re unable to read the Japanese instructions. You’ll make use of the ingredients you collected, various utensils with different functions and of course, a selection of condiments spearheaded by Ajinomoto mayonnaise. In some ways, the gameplay in this section can be compared to a proto-Cooking Mama in terms of presentation, although less so in execution; Cooking Mama‘s minigame-based steps are nowhere to be found here, with Wonder Kitchen taking a more realistic approach – the game even provides you with recipes on completion of the cookery section, allowing you to make the three dishes yourself – of course, it’s quite carefully specified that none of these illustrious dishes are possible without the creamy taste of Ajinomoto. Did you know that Ajinomoto-brand mayonnaise is made using eggs “born from cheerfully and raised chickens”? Apparently it is, according to this Amazon description. I’m actually tempted to pick some up and test it out for myself now. I guess the game’s promotional side worked! 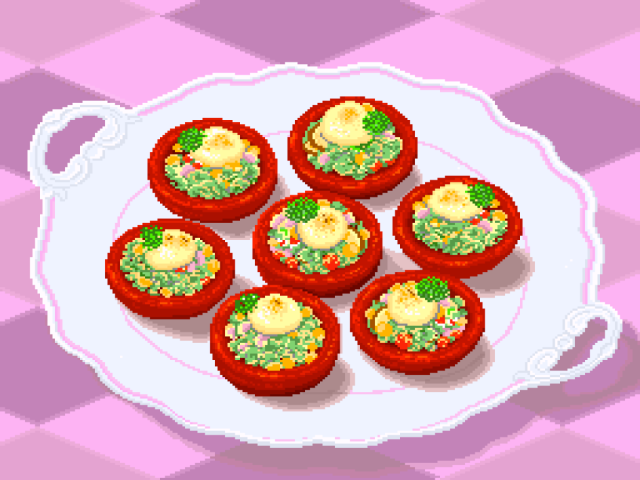 One thing that must be said is that for a promotional game, the sprite-work on display in Wonder Kitchen is absolutely gorgeous. The game’s more ‘supernatural’ elements are bold, colourful and distinct, backgrounds nicely illustrated and in some cases, with a remarkable level of detail. The ‘end product’ images displayed after completing a cookery section offer a ridiculous level of detail, in some cases almost futuristic (albeit with a stylised twist) – forget Blast Processing, the Super Famicom has the power to make food that consists almost entirely of mayonnaise look appealing! (OK, perhaps not the one involving a pineapple, but that’s best witnessed for yourself…) In the point-and-click sections, almost every on-screen object can be interacted with and viewing the unique animations of each and every one is both amusing and a visual spectacle in itself. The entire game is heavily stylised and benefits from a mixture of realism and comic-style flair. 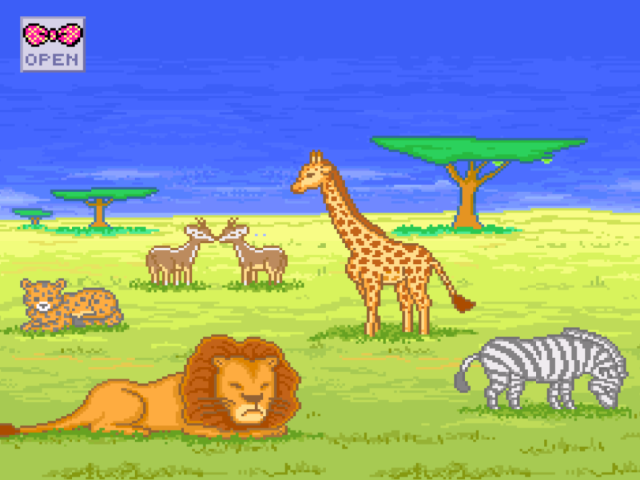 Motoko-chan no Wonder Kitchen is strange in terms of its premise, its content and the circumstances surrounding its existence. It’s a game that wants you to buy mayonnaise, but somehow manages to be a charming and unique experience in its own right. It’ll hardly provide you with a challenge and isn’t complex in the slightest when it comes to gameplay, but it’s an unforgettable game nonetheless. It’s arguably one of the most bizarre titles in the entire Super Famicom library, so for this alone, it should not be overlooked. If you’re in the market for mayonnaise and this game doesn’t convince you to go with Ajinomoto, then I don’t know what will! 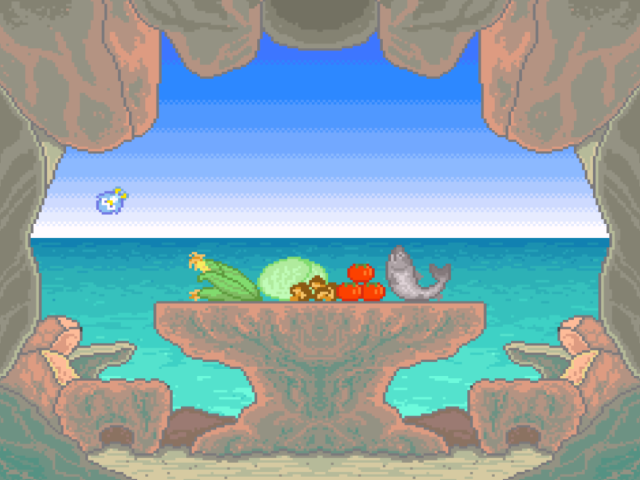