Today Nintendo introduced yet another surprise for E3 week, the introduction of the Nindies@Home promotion, allowing you to download 9 different demos for indie titles that will soon be hitting the Wii U eShop.

As well as getting to try a handful of these games out without being on the show floor in LA, Nintendo will be offering a 15% discount on all of the games in the lineup upon their eventual release, providing you download and play the previews. This is a great incentive not only to try out some great indie titles that may otherwise have slipped through the radar amidst the news of triple-A titles, but make a saving on them in the future.

As a small, independent games site trying to get a bit bigger, promotions like this are a great for those of us who can’t make it to E3, so thanks to Nintendo and all the developers involved for making this a reality; go out there and download some previews to show your support! So, in case you can’t get your hands on the previews, or if you simply want to find out a little bit about each of the games available, here are some impressions I’ve written for your perusal. Enjoy! 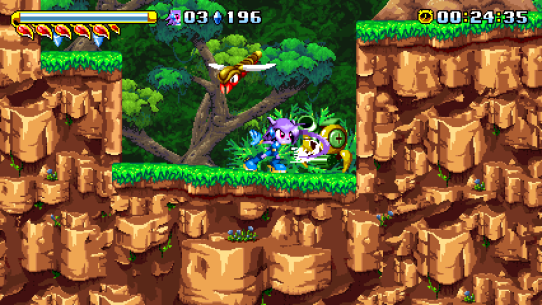 After playing Freedom Planet, it’s no surprise that the game started off life as a Sonic the Hedgehog fan-game. This is apparent in both in visuals and gameplay, but whilst many will find it easy to criticise the game’s origins, even from a short preview it’s apparent that GalaxyTrail Games have a passion like no others. First things first; the game is absolutely gorgeous. The 16-bit style that harkens back to the Sonic games of old is a real treat for the eyes; the action takes place before vivid and exciting backgrounds, and the cute characters’ animations are smooth and give you a great sense of control over their diverse move-sets. Environment-based puzzling offers a delightful balance of speed and exploration, successfully providing the traditional Sonic-style gameplay the game aims to make you reminisce of, but still bringing something original to the table that stands firm in its own right.

Whilst fan opinion has historically been divided over voice-acting in Sonic games, the voice acting here is cute and gives personality to each of the characters (although only one, Lilac, is available in the preview); in the full game each character’s unique abilities will likely mix up the gameplay and offer different approaches to each level. All in all, it’s apparent that Freedom Planet is shaping up nicely for its Wii U release, and will be right at home on the Wii U amidst its diverse library of quality platforming titles. 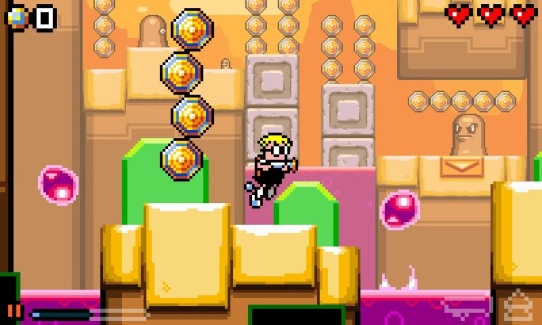 Renegade Kid’s Mutant Mudds: Super Challenge does little to change the Mutant Mudds formula seen in earlier offerings for Wii U and 3DS, providing the now well-established fiendishly difficult puzzle-platforming action, chunky retro-inspired graphics and a killer chiptune soundtrack. This is in no way a bad thing, however; this title is clearly for players who enjoyed the first game, erasing the concept of progressive difficulty and thrusting you into stages at the hardest difficulty available, and along with this the introduction of boss battles even further increases the challenge; only Mutant Mudds experts need apply, by the looks of it. The dimension-hopping mechanics that were clearly right at home on the 3DS are in no way out of place on the big screen, not only stirring-up the gameplay, but providing a unique visual aspect to the game that the Wii U certainly excels in displaying. 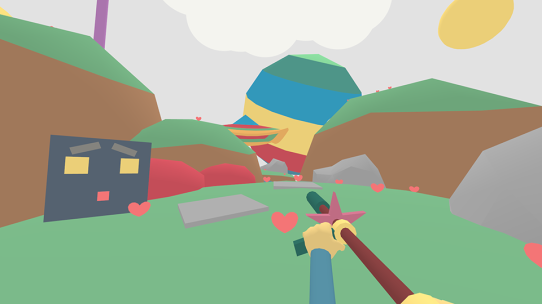 QUICKTEQUILA’s Lovely Planet is a difficult title to describe; it’s certainly quirky and charming, from the cute and upbeat soundtrack vaguely reminiscent of Katamari Damacy to the bright, abstract visuals that are easy on the eye and heavily contribute to the game’s ‘weird’ feel. The gameplay is fast and surprisingly difficult, operating without overbearing guidance for the player, but instead offering a bare minimum of information that puts a heavy emphasis on letting the player learn and discover the game through repeatedly traversing each level, something executed very quickly (with the mere press of the ‘X’ button you can instantly find yourself back at the start of the level). There are certainly no first-person shooters like it out there, and possibly no games on the eShop that can compare in terms of sheer originality and weirdness! Definitely one worth keeping an eye on.

It’s immediate from the moment you start playing Typoman that the game is oozing with atmosphere. The dark, eerie visuals combined with an ambient soundtrack subtly immerse you in the gameplay, which at first appears to simply be easy to grasp platforming action. However, the twist that makes this game unique is the use of typography that gives this game its name; by manipulating letters found all across each stage, albeit to simply use them as platforms or to make words up using them, you can control elements of the world to help progress through the game. For example, spelling out the word ‘DOWN’ lowers a gate blocking your path. This seems basic enough, but as the game progresses, you’ll find both your platforming and puzzle solving skills put to the test in an incredibly creative manner. This, combined with the game’s unique and captivating visual overtone make this a title that could certainly be worth your attention. 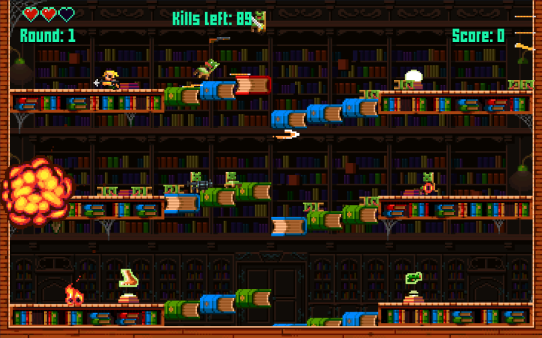 For a game with such a daunting title, Extreme Exorcism is a surprisingly cute game. The pixellated ghouls that populate the game’s diverse environments certainly don’t come across as particularly scary, but the action they help to create certainly is; the interesting and well-executed ‘ghost’ mechanic, in which in each rounds the ghost enemies literally ghost the movements you made in the rounds prior, can lead to hectic, exciting levels that really force you to think more carefully about your movements than you would normally in a platformer. The game offers 4-player co-op, something which undoubtedly could be a lot of fun, but at the same time really puts the ‘extreme’ into the game’s title. Its no secret that Nintendo have always been pioneers of local multiplayer, so a title that encourages closely-knit teamwork (and potentially multiplayer-induced bouts of rage!) is very well-suited to the Wii U. 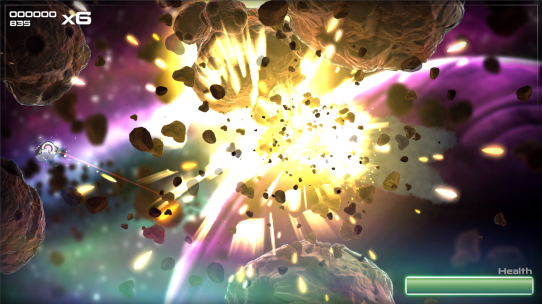 RIVE’s fast-paced, chaotic shoot-em’-up gameplay is a grand departure when compared to Two Tribes’ previous Wii U ventures, laid-back puzzle-platformer series Toki Tori and cool, fast-paced cube puzzler Edge. Taking classic explosive shmup action, constantly bombarding you with barrages of gunfire and missiles (which you can easily return in a full 360 degrees) and combining it with creative platforming elements which see your ship take on different forms, such as a spider-like tank form that allows you to traverse the complex interiors of space stations, or sections presenting you with environmental challenges that disable your gunfire or limit your movement, encouraging you to take a more unique approach to staying alive. The game provides you with incredibly satisfying feedback from each enemy you destroy, making you feel even more powerful than you probably are. Even the fiery explosions that engulf your own vehicle once destroyed are a real visual treat; it’s no surprise that Two Tribes themselves have commented that players who have demoed the game “really, really like it when they fail in RIVE”! If you like the sound of watching incredibly satisfying, lead-pumping chaos, all set to a thumping electro soundtrack unfold on your screen, then this is the perfect game for you. 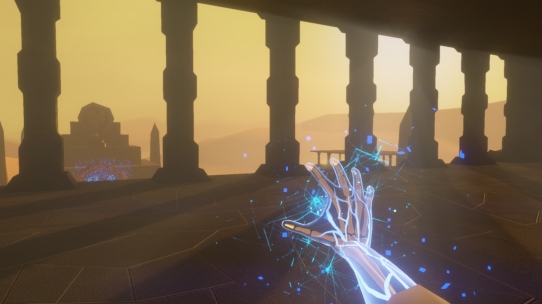 Soul Axiom is another title that provides a lot of atmosphere. Whilst it’s difficult to grasp the objective of the game from just the preview, the interesting mechanic of ‘phasing’ elements of the world in and out provides an incredibly unique way of traversing the game’s beautiful environments. The game is absolutely oozing with style; stepping out to overlook the preview’s Egyptian-style architecture was a sight to behold, and the first-person perspective really succeeds in showing off this strong point of the game. The mysterious abilities and setting your character is faced with in the game only a more compelling experience, and although the gameplay is creative and holds much potential, this title could be worth looking into for its storyline alone. 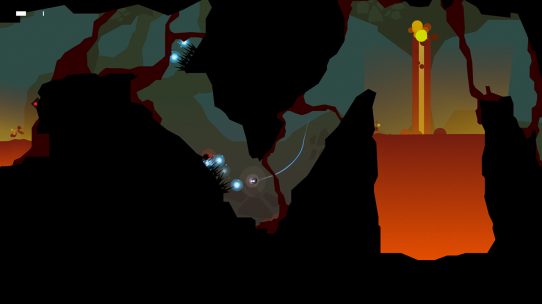 Forma.8 is a perfect display of how simple visuals can be used to effectively convey a brilliant idea. Basic puzzling mechanics revolving around the navigation of your spaceship throughout a beautiful minimalist world, offering a relaxing experience that can still test your brain at times, utilising a simplistic toolset in culmination with some innovative physics-based puzzles. The physics are slow and floaty, and truly give a satisfying experience of flying, and the way you find yourself thrust into a seemingly hostile environment with few hints or directions encourages the exploration and ingenuity that would really be required to operate such a craft; MixedBag have done a great job in offering an immersive and innovative experience that offers a soothing and mysterious take on space-based gameplay, but one that could potentially evolve into a challenging and engaging one. 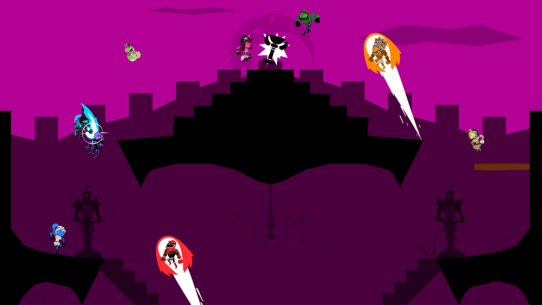 The easiest way to describe Runbow is chaotic fun. Not many games can boast 9-player local multiplayer, and this is certainly a title that can benefit from being a truly engaging multiplayer title. The concept is simple, run through each stage, complete basic platforming trials, and navigate an environment in which the key elements are dictated by the colours of the rainbow; running and rainbows, now you know where the title comes from! The graphics are certainly easy on the eyes, which will certainly come as a relief when 9 different runners are sprinting madly around the stage! The overall concept of the game seemed simple, but it seems that insanity comes with numbers and the concept of 9 players running wildly through each stage sounds like it’ll certainly be a spectacle to behold.

If you like the sound of these titles, get to the eShop and download them now, they won’t be available for long!

A UK-based appreciator of video game culture with journalistic ambitions. Creator of Minus World.
View all posts by Oliver Jameson →
This entry was posted in Features, Previews and tagged E3, Indie, Indie Games, Nintendo, Previews, Wii U. Bookmark the permalink.