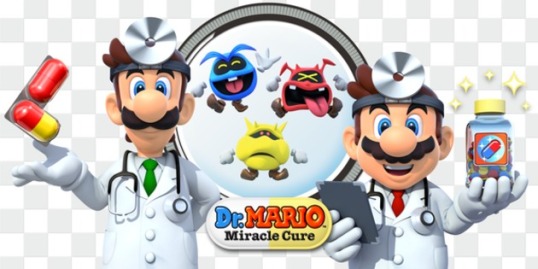 For the first time since his appearance in Super Smash Bros. for Wii U/for Nintendo 3DS, Mario is putting his white coat and stethoscope back on and renewing his dubious medical license to provide us with some more medical puzzling action. Last year Mario left the surgery work to his younger brother in Wii U title Dr. Luigi, but this time pair are now running the clinic together in what could potentially be the most comprehensive Dr. Mario game to date. 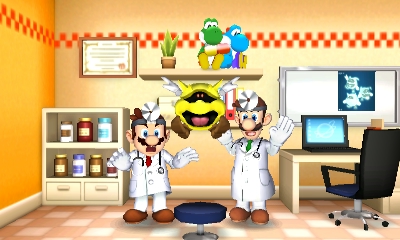 From the moment you start up Nintendo’s newest eShop puzzle offering, Dr. Mario: Miracle Cure, you’ll discover that this game is truly to the point. Rather than find yourself greeted with a traditional title screen, the game immediately presents you with its selection of modes and options; ideal if you’re looking for the pick up and play experience that Dr. Mario‘s gameplay lends itself to perfectly. 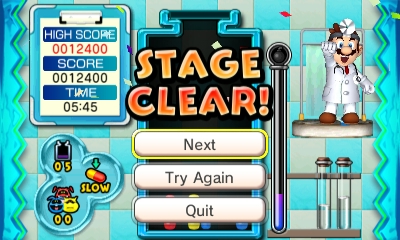 To some extent, portability is Miracle Cure‘s greatest asset; such an easy to play yet difficult to master puzzler is as good for filling those spare 10 minutes on the bus as it is for sinking in hours of high-score smashing. Whilst Dr. Luigi’s lack of portability as a result of its Wii U release made it suffer in this aspect, the series feels much more at home on 3DS, and is an awaited new entry in the series on the system that feels long overdue. 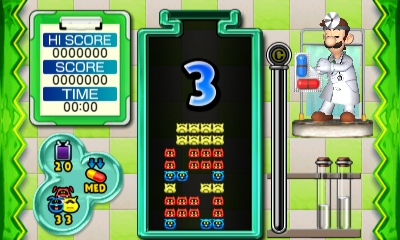 And just because the series has made its way onto a portable system, doesn’t mean it slacks off when it comes to offering gameplay; as well as the traditional Dr. Mario formula found as early as the NES original, Miracle Cure offers a perfect recreation of Dr. Luigi’s ‘Operation L’ mode, which replaces the iconic two-toned capsules with L-shaped ones as a tribute to the titular sidekick, a subtle change that provides a unique spin on the classic gameplay. Also included is the Virus Buster mode originally conceived for More Brain Training/Brain Age 2, a more gentle, slow-paced take on Dr. Mario which utilises the 3DS touch screen to control the falling pills, using the 3DS on its side in a book-like manner. Whilst all three of these modes were available in Dr. Luigi, having them in your pocket to play on the go is a much better-suited option for getting the most out of the seemingly endless puzzling they provide. 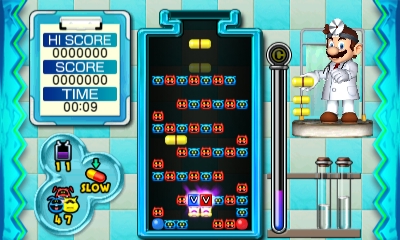 However, choosing not to rest entirely on its laurels, Miracle Cure introduces a new mechanic that proves that it’s title is not entirely an attempt to promote the plumber’s medical skills; the ‘Miracle Cure’ items that are available in both the Dr. Mario & Dr. Luigi gameplay modes provides a subtle twist in the form of creating new options to create even higher scores. After building up a meter through clearing away viruses, access to one of four types of randomly selected item can perform ‘miracles’ such as clearing away all viruses or capsules of a specific colour, destroying entire lines in a specific direction, or even just blasting away anything within a set radius, can offer that last-ditch way of clearing the bottle that could prove crucial in achieving a good score, or even simply avoiding a game over. This subtle change can have a great impact on the gameplay, and whilst purists may not be so enthusiastic about the mixup to such a traditional formula, the inclusion of such an element in the gameplay can be easily toggled on or off. 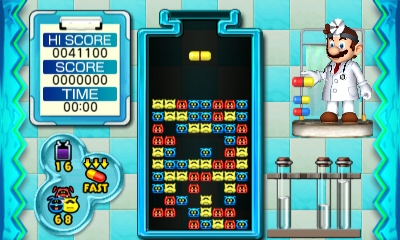 As well as three distinct gameplay modes, even greater customisation over gameplay is provided through the ‘Custom Clinic’ option, allowing you to play both an ‘Endless’ option which provides a challenging continuous stream of viruses, allowing you to try and reach the highest score you are met with a game over; online leaderboards allow you to judge your skill against the rest of the world, but considering a week has passed since the title’s release in Japan, you’ll have to bring your a-game if you want to topple the existing high scores! As well as this option, the stable ‘Vs. CPU’ battle puts you up against a computer opponent, testing your speed at clearing all of the viruses as quickly as possible.

Similar options exist if you prefer to go up against human opponents, through local and online battles which not only let you go up against each other in Dr. Mario and Dr. Luigi modes, but work together in a special co-op version of Virus Buster. The inclusion of Download Play is a nice touch that has unfortunately been absent from many Nintendo games as of late, but is a nice option for playing quick local games against your friends (or enemies, if you are the type to make enemies over Dr. Mario. I’m not judging you). Special ‘Miracle Cures’ have also been added to mess about with your opponent’s gameplay, and even more competitive Vs. game is ideal for veterans who wish to break their rival’s perfect combos; just don’t expect any mercy when you’re on the receiving end! 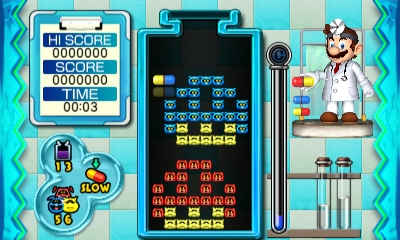 If you’re looking for something less free-flowing in comparison to the staple gameplay modes, the introduction of the ‘Miracle Cure Laboratory’, a selection of specifically designed stages of varying difficulty levels that seek to put your use of ‘Miracle Cures’ to the test across some truly taxing pre-set stages. Some of the Advanced stages are not for the feint-hearted, so you might want to try and brush up your skills in the training mode first, an introduction ideal for newcomers to the series who want to learn the formula. These additions are nothing game-changing, but they offer a pleasant change of pace for anyone interested in something more methodical to break-up the high score frenzy of ‘Endless’ mode. 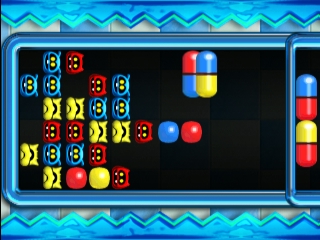 The game’s soundtrack is made up of a nice mixture of nicely-done remixes of classic Dr. Mario music that will likely be familiar to anyone who has played Super Smash Bros., as well as a handful of charming tracks lifted straight out of Dr. Luigi. Virus Buster mode is accompanied by an incredibly chill, laid-back take on Dr. Mario‘s soundtrack that suits the slow-paced gameplay perfectly, almost making it relaxing. One improvement that could certainly be made to the soundtrack, however, is the ability to select a song before starting a game, as well as turn the music off altogether. I was very surprised to see this option absent from the game, considering its appearance in almost every other game in the series, and it’s one of a few details that, along with the missing title screen, give the game a very ‘cut-back’ feel. 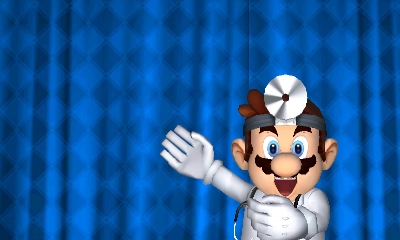 The game’s visuals are simple, as you’d expect from a puzzle game, with many assets seemingly taken straight from Dr. Luigi. Whilst this is not major fault as such, as the primary focus of the Dr. Mario series has always been in the gameplay, it is difficult not to notice that certain animations such as those of Mario & Luigi themselves have a tendency to feel a little lifeless at times, again suggesting that this title may have been conceived as a more minimal, perhaps even rushed way of offering a Dr. Mario title on the 3DS. 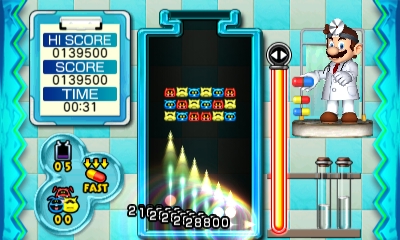 Regardless of such visual implications, Dr. Mario: Miracle Cure succeeds as a Dr. Mario title, offering something new in the form of the ‘Miracle Cure’ mechanic and the modes surrounding it, as well as the traditional puzzling formula of the original that will likely keep die-hard fans and puzzle game enthusiasts satisfied. Whilst this new content isn’t the most groundbreaking addition to the series, it’s a nice, optional change of pace alongside the untouched traditional style of gameplay. The addition of new multiplayer modes, as well as a training mode to help new players get to grips with the series both make Miracle Cure a perfect entry into the series, and its new, portable home on 3DS create the ideal pick up and play puzzle experience.

A downloadable copy of the game was purchased for this review.