“The classic becomes a legend in CD-i”

It’s undeniable that Tetris is a classic. It has gone down in history as the undisputed king of puzzle games, available for almost every platform under the sun, as well as running on everything from graphing calculators to oscilloscopes. It’s timeless formula excels through being both easy to understand but challenging to master, helping to cement its place both as one of the best-selling games of all time, and on many occasions leading to it being called one of the greatest games of all time.

When you take all of this into account, the tagline written above that accompanied the Philips CD-i version of Tetris is making a pretty hefty claim – that somehow, this version of Tetris surpasses all others, turning the beloved classic into a truly legendary experience. With this in mind, after playing Tetris for CD-i, you’ll probably be asking yourself something along the lines of “how did they manage to take a step backwards?”. It’s almost ironic that the tagline is grammatically incorrect…

There are two particularly attention-worthy aspects of this version of Tetris that make it stand out from the hundreds of counterparts it has on every other platform. The first is the visuals – CD-i Tetris is arguably the best-looking version of the puzzler ever made. Traditionally, the area outside of the main playing field in which the falling blocks that make up the game reside is essentially dead space, unused so as to draw focus to the main gameplay area. However, in this version of Tetris the area around the ‘well’ is used to display gorgeous FMV nature scenes from a variety of different locations. Serene landscapes ranging from the crystal clear spray of a waterfall to the gently drifting waves against the sands of an auburn-tinted beach at sunset create a relaxing, almost soothing Tetris experience that does a fantastic job at creating atmosphere in a game that wouldn’t normally require any. If anything, the beautiful minimalist aspect of both the game’s interface and its simple yet attractive backgrounds show a magnificent way in which the developers have built on the simplicity that lies behind the Tetris concept.

Once you clear a certain amount of lines, the game will automatically cycle between a selection of 9 environments, as well as gradually increasing the speed at which the blocks fall. This background change provides a more obvious cue for the game’s progressive difficulty than in other versions, but unfortunately this seemingly innocent attempt at some aesthetic variation comes with a remarkably frustrating downside; as the game’s level increases, the playing field changes position on the screen, something potentially catastrophic for those relying on perfect concentration to get a high score. This is one of the many ways the game violates the now strictly enforced Tetris guidelines – I wouldn’t suggest using this particular version of the game if you’re trying to break any world records.

The second major highlight of the CD-i Tetris experience is the music. Jim Andron’s breathtakingly relaxing soundtrack provides the perfect musical accompaniment to the game’s tranquil nature scenes and (initially) slow-paced gameplay, making this a version of Tetris that works more effectively as a relaxation method than as a game of Tetris. It’s arguably as insulting as it is praiseworthy to say that the soundtrack is the game’s most remarkable feature and makes up a large portion of the game’s value, standing miles ahead of any other soundtrack on the CD-i, as well as possibly being the best music in any version of Tetris released to date. Outside of the game’s musical score is a complete absence of any sound effects, showing that this is a title that takes a firm ‘less is more’ approach in more areas than one – something the game both benefits and suffers from. 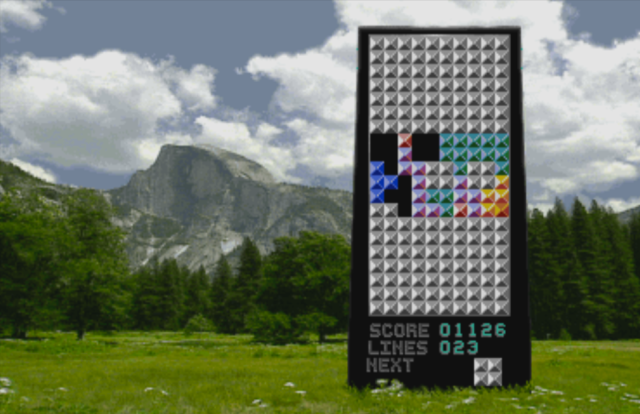 If you’re a real Tetris enthusiast, you’re probably more interested in the actual game of Tetris itself that lies beneath the thick layer of 90’s aesthetic. Unfortunately, the game’s biggest shortcoming  is the actual gameplay, which as you’d imagine, is a bit of a problem. CD-i Tetris simply lacks the degree of control and precision offered in other instalments, with vital features missing that will surely aggravate anybody who considers themselves familiar with the traditional Tetris formula. Rotating blocks is now fixed to only one direction as opposed to two (something for which the CD-i’s abomination of a controller is partially to blame) which can lead to some incredibly tedious situations as you frantically scramble to turn a block the right way around. Two movement speeds are available, the normal slow block drop and a ‘hard’ drop that speeds up movement considerably – unlike in almost every other version of Tetris, there’s no way to cancel out of a hard drop, so you’ll need to make every move with absolute conviction, something made particularly difficult by a lack of ghosting (which, in other versions, displays where your block will land based on its current position) and generally clunky button layout on the aforementioned controller that bears closer resemblance to something used by contestants on a game show than something you should use to play video games.

The biggest problem with the CD-i version of Tetris is that it feels like a wasted opportunity – this is a version of Tetris that’s unique and interesting in its presentation, yet falls flat when it comes to the most basic execution. It takes a concept that excels through its simplicity, building on it in some ways, and drastically stripping it back in others. It’s easy to see that by making unnecessary changes to arguably flawless gameplay, not to mention the side-effects of generally clunky hardware and a truly terrible controller, Philips have failed in turning the classic into a legend on CD-i. What they have created, however, is a puzzle game with truly beautiful, outstanding minimalist presentation. Coupled with a fantastic soundtrack by Jim Andron, this is a game that excels in creating a surprisingly atmospheric experience – truly a case of form over function.

Philips may not have created a legend with Tetris on CD-i, but they have succeeded in making one of the chillest games of all time, intentionally or otherwise.