Several months have passed since the early access release of Mighty Switch Force! Academy earlier this year. The latest instalment of WayForward’s puzzle platformer, tells a prequel story, sending series protagonist Patricia Wagon back to school to compete against fiendish simulation courses in preparation for her life of futuristic law enforcement. After previewing the game back in September, it’s now time to take a look at how the title has evolved throughout its development and whether or not Steam’s early access model has worked in WayForward’s favour when expanding the Mighty series like never before. 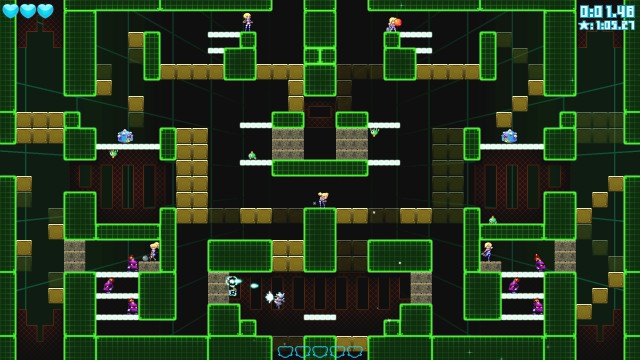 One thing can safely be said about Academy‘s gameplay; if you’ve enjoyed the past two Mighty Switch Force! titles, you’re certain to have a good time here. The base gameplay remains relatively unchanged from previous instalments, albeit with the addition of a few new mechanics that help to keep things fresh. The new, arcade-style mechanic of transitioning from one side of the screen to another as opposed to dying when falling in gaps seems like only a basic change in structure, but in combination with the game’s new full-screen stages, it works tremendously well in leading to many a creative and well-constructed puzzle. The large stages themselves create a satisfying sense of progression as you progress to each puzzle within a level, giving you a good feeling of progression as you round up the Hooligan Sisters and allowing you to plan out the optimum movements ahead to best make use of each level’s layout, perfect for shaving a few seconds off your time on each attempt. 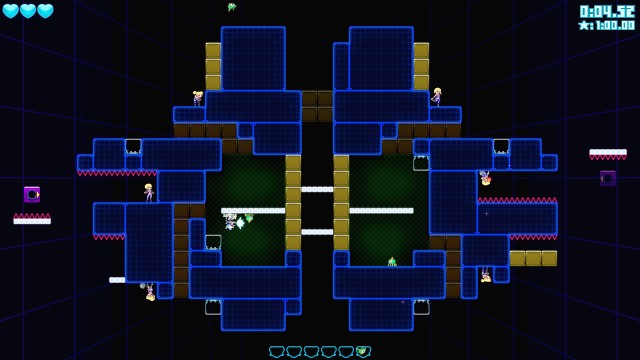 Admittedly, if you’re turning to Academy having played the previous Mighty Switch Force! games looking for something completely new gameplay-wise, you may be unsatisfied. However, only five of the game’s twenty five stages return from previous instalments; its through the brand new levels that the game brings its variety. The twenty stages created just for this game mix elements now standard to the series, revolving around a combination of fighting off enemies and manipulating the terrain with the trademark ‘switch’ ability, relying on a mixture of perfect timing and platforming skill to achieve the best time possible, as well as a variety of never before seen concepts in a Mighty game; smaller, more isolated stages with heavy puzzle elements that require the likes of using exploding enemies to allow you to progress and making careful use of one particular route to progress. Cut-away areas of stages akin to those seen in New Super Mario Bros. Wii can conceal puzzles of their own, requiring fast thinking to make sure you stay under par. Just like previous titles, this game is ideal for speed runners and trying to best your own scores is likely a key point of replayability; with this in mind, the lack of online leaderboards is quite a disappointment and likely would’ve added a greater incentive for more competitive players to study and learn the best approach to each stage. 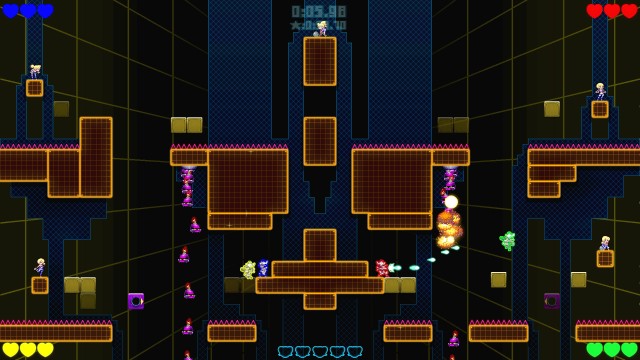 A lack of online features unfortunately extends to the game’s multiplayer modes, which consist of a four player co-op mode and a competitive versus game. Whilst there’s no denial that this is an ideal couch co-op title for both puzzle and platforming fans alike, highly accessible due to its simple gameplay and strong potential for enjoyable competition between players in versus mode, it makes one wonder if this title was entirely suited for a PC release; it’s true that the use of early access has allowed the game to develop well over time, fixing glitches and expanding on content progressively, but a console release may have been a more preferable platform for encouraging local multiplayer. Thinking about this on the basis of a PC release, support from WayForward for the upcoming Steam consoles may make this part of the game more accessible, as the large playing fields and hectic co-op it has to offer will most likely be better suited for a TV screen than a computer monitor.

As with previous entries in the series, the aesthetic aspects of Mighty Switch Force! help it to stand out as a unique and attractive puzzle platformer. Stylish stage designs and brilliant personality-filled character designs are a real treat on the eyes, even if many assets have been re-used. However, it would’ve been nice to see the sharper HD graphics from the Wii U upgrade of the original title, Mighty Switch Force! Hyper Drive Edition, at least present as an optional visual style in the game alongside the upscaled sprites, for those who prefer a more hand-drawn look; arguably this would’ve been better-suited to the upscaled, zoomed out size of the game in comparison to the 3DS entries.

In terms of interface, the in-game HUD is simple and minimalist, ideal for letting you focus as much of your attention on the large playing field as possible. Outside of gameplay, the menus and interfaces offered by Academy feel quite bare-bones, both visually and in terms of the options they offer; more depth in the range of control schemes and visual customisation would have been a nice addition, especially for the multiplayer modes where controls are divided up between one keyboard and three controllers. 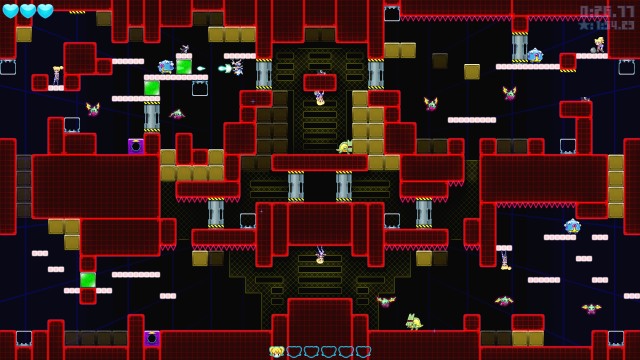 Whilst the music tracks present in the game are re-used from past MSF! instalments, this is in no way a bad thing; Jake Kaufman‘s fast paced, upbeat electronic soundtrack is the perfect match for the hectic and speed-focused gameplay offered by Academy, ideal for getting you pumped up both during singleplayer speed-running session or a fierce multiplayer battle. It’s not often that music is a selling point for a game, but in this case I feel its something that simply can’t go unnoticed (you can actually download the soundtracks for the first and second game on a ‘name your price’ model, so check them out for yourself!).

If you’re a fan of the Mighty Switch Force! series and you’re looking for something completely fresh, there’s a chance you may come away from Academy feeling underwhelmed, but if the idea of more of the series compelling puzzling antics interests you, then this latest instalment is definitely for you; it expands on the formula you know and love in many positive ways and the addition of multiplayer is definitely a welcome addition that previous titles could have benefitted from, not to mention the large number of well-designed, brand new stages. If you’re new to the franchise and are looking for a good starting point, this could be the ideal entry to ease you in, mixing together some minor yet creative new elements with classic stages hand-picked from the original two games, making it almost something of a ‘best of’ title.

It’s not too much of a stretch to imagine that this is a title that could be expanded and improved in the future thanks to the unique nature of its release. It can be said that there are a few minor tweaks that would help to create a more streamlined and satisfied experience, so for now, we’ll have to look to the future and see if this will be fulfilled.