It’s a sad truth that a large number of the many games marketed towards girls that are put out onto the market are quickly dismissed. Many of them are instantly pushed into the category of ‘shovelware’, in some cases based entirely on aspects such as the box art or title. Whilst perhaps the likes of the DS and Wii, which sported much larger casual user-bases than your average console, may have carried more than just a few low-budget titles aimed at girls, there’s no reason that there aren’t games with this audience in mind that can’t be considered some of the ‘hidden gems’ of their respective genre.

The Style Boutique series (known as Style Savvy in the US, or Girls Mode in Japan) has always drawn my attention for a number of reasons. Firstly, it’s published by Nintendo, which in some sense (or perhaps simply as a result of some kind of subconscious personal bias) carries a perception of quality about it; with so many games in the fashion genre on their systems, if Nintendo are willing to invest in this particular title, then there’s bound to be something worth noting here, right? The second point of interest is this particular title’s developer: Syn Sophia, purveyors of all things feminine, with titles under their belt such as Pretty Rhythm Mini Skirt and of course, previous entries in the Style Boutique series. What many do not know, however, is that the company we now know as Syn Sophia is in fact the former AKI Corporation, a company best known for their work on the likes of WWF No Mercy, Def Jam Vendetta and Kinnikuman Muscle Grand Prix. Whilst it’s clear that the developer has gone through a transition, changing staff, name and focus alike, it’s difficult not to take note of a Nintendo-published fashion game developed by a company formerly known for a number of much-loved wrestling games (next time you’re doing makeup in Style Boutique, please remember that the game you’re playing was developed by the company formerly responsible for this!). 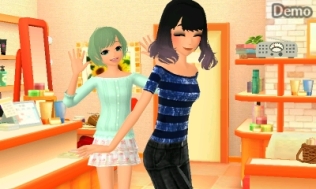 Of course, it’s only fair to judge this latest entry in the Style Boutique series on its own merits, backdrops and power bombs aside. From playing the trial version of New Style Boutique 2: Fashion Forward (which, contrary to what the name suggests, is actually the third entry in the series), one thing is very clear; the tried and tested formula of previous installments has remained relatively unchanged. The basic idea behind Style Boutique is that you play the role of a stylist, helping customers in your very own boutique pick out the outfits of their dreams, eventually working your way up the fashion chain until you can compete in catwalk modelling shows. 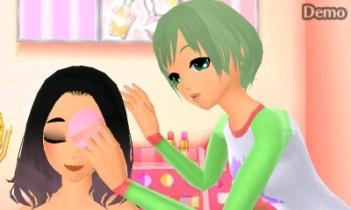 However, this third title changes things up a little, adding two new professions into the mix; as well as selling clothes, you now can take on the role of both a hairstylist and a makeup artist, helping your clients get the look down on three different levels. This is a pleasant addition in that it not only brings more variety to the game, creating gameplay opportunities beyond simply dressing customers, but in that it also adds further customisation options for your own player character, who you can both style and dress in any of the clothes available in your shop; the demo featured 350 unique items and that didn’t include a number of types of item such as bags and even leg warmers (perhaps there are more than a few similarities between this game and some of Syn Sophia’s past ventures after all!). 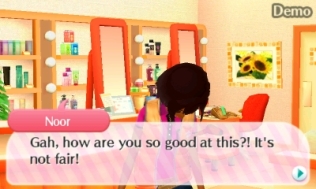 This may simply be the structure of the demo, but the game’s way of putting you into the shoes of these three fashion jobs can only be described as weird! The way you essentially waltz into an established hairdressers and start cutting people’s hair without permission, even to the extent of causing the owner to reconsider her career choices, feels almost comedically forced. Whilst this was never a game that was going to sell based on its story, there’s something a little unsettling about your playable character being some kind of ‘Fashion God’ who is more skilled than a wide variety of trained professionals, to the extent that shopkeepers rely on you to serve their customers to stay afloat! Maybe I’m just overanalysing things though… 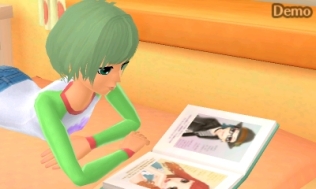 As you can see above, I did my best to use the game’s toolset to create a fairly crude recreation of Minus World’s mascot, which was a bit of a struggle with the items I had to hand (although over 19,000 are promised for the full game, so I imagine it would be easier there) . Customising clothing is seamless and the interface is clear and simple, improving on its predecessor both visually and in terms of ease of use. The method of searching for items has also been given something of an overhaul and whilst this is mostly through aesthetic changes, it comes across as a lot less clinical and more accessible than that of the previous game, something that will undoubtedly be much more appealing to younger users. 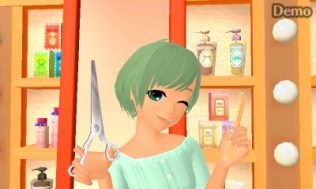 Hair and makeup, the game’s new additions, work in a similar manner to clothing; clients give you hints about the sort of style they want and its up to you to fulfil what can often be rather cryptic requests if you ask the wrong questions (something vaguely reminiscent of Animal Crossing‘s peculiar method of character creation). The principal itself seems fine, but this is where the game, or perhaps even the series, runs in to its first major hurdle; even if you don’t fulfil your customer’s request accurately, you’re rarely scolded for it. In fact, it’s possible to completely go against their wishes, and as long as you stay around each character’s budget, you’ll get no more than around a single line of additional dialogue. 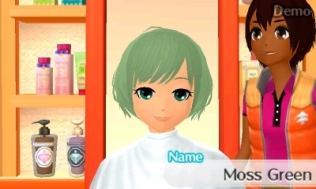 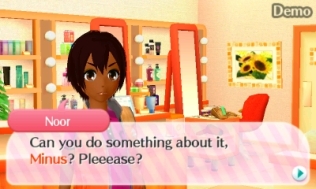 Now I’m not saying the game needs to put you in the gallows for every little error, because its by making mistakes that you learn and improve. But unfortunately, the game carries an attitude that suggests the target audience, primarily young girls, won’t be able to take failure, and as a result you find yourself congratulated even if you do a bad job. I honestly feel that this is what holds the game back, because in terms of the gameplay, you’re presented with a solid fashion game with plenty of customisation; for some, this on its own may be enough, but if the game offered more of a challenge to players that encouraged them to be creative and to learn through trial and error, rewarding them for experimenting but at the same time sticking by the basic concepts of the game’s formula; after all, why pose the task of fulfilling a request if there’s little variation in outcome from each different approach?

Based on my time with the game so far, it seems like whilst the basic gameplay is shaping up to be another solid fashion title, it’s disappointing to see the that the series has yet to overcome the major hurdle in design philosophy. Unfortunately, after three titles, it seems unlikely to me that we’ll be seeing any drastic changes to this any time soon, but judging purely on the merits of gameplay enhancements over previous installments that do a great deal to increasing the amount of variety and creativity possible by players, New Style Boutique 2 is certainly one to watch for fans and newcomers alike.

New Style Boutique 2: Fashion Forward will be released in Europe for Nintendo 3DS on 20th November 2015.

A trial version of this game was used to produce this preview.