As I mentioned in my Mario spin-off characters feature last month, Nintendo’s main man can be considered a jack of all-trades; be it sports, medicine or even knitting, if it exists and isn’t illegal, Mario’s probably given it a go at some point in his career. However, the moustachioed plumber’s short-lived career as a demolition worker has a tendency to slip people’s minds when recalling the more iconic of his ventures.

The 1985 puzzle/action game Wrecking Crew has historically had a tough time competing for the spotlight with the likes of its fellow NES Mario spin-offs, despite being referenced countless times in a variety of more recent titles such as through a stage appearance in the latest Super Smash Bros. and even as a song in the peculiar Dance Dance Revolution Mario Mix. Even thought it was an NES launch title in the US, Wrecking Crew’s fame likely suffered at the hands of both its peculiar concept and the absence of Mario’s name from the game’s titles; after all, if you think about a kid who has to choose between a game featuring Mario’s heroic adventures in a magical kingdom or a game featuring someone who, at a glance, may or may not be Mario, doing blue-collar demolition work, the choice doesn’t seem so hard, does it?

It’s likely for this reason that Wrecking Crew‘s more colourful sequel, Wrecking Crew ’98, also slipped off people’s radars. That and the fact that it was yet another Super Famicom release hindered by limited distribution through the ‘Nintendo Power’ service, which allowed players to ‘download’ games from retail kiosks onto special re-writeable cartridges (I detailed it a little further in the first instalment of ‘You’ve probably never played’, which you can read here). Eventually this particular title would see a cartridge release, but regrettably it never made it westward, meaning many players would miss out on a thoroughly more polished and well-presented demolition experience.

The first major difference between this iteration of Wrecking Crew and its predecessor is a large improvement in the visual department; no surprise, considering the jump from Famicom to Super Famicom, but a pleasant and welcome improvement that makes the concept of the original more attractive, literally. The game’s story (its inclusion making the second major difference between the two games) is told through bright and nicely animated cutscenes that break up the stages and provide a cool ‘reunion’ with some of the original game’s cast of enemies, albeit now drawn in a more cartoony and appealing graphical style. Not to bash the Famicom, of course, but the pixel art in ’98 truly is impressive.

The plot is a nice addition, even if it does come across as a little… cheesy? The idea is that Mario comes back from some kind of holiday to find that Bowser has filled the Mushroom Kingdom with his own brand of high-rise buildings (evil ones, of course) which are depriving the land’s foliage of sunlight, causing them to wither and die (the flowers all have faces so its not exactly like you can just leave them!). Seething with rage and with little regard for the tenants of these buildings, Mario goes to his house and pulls out a massive hammer, determined to destroy Bowser’s structures and save the environment. Mario is truly the Al Gore of the Mushroom Kingdom.

The gameplay itself has actually changed somewhat between games. Whilst the general theme of demolition and the way you go about doing it is the same, rather than having to destroy all pieces of the building like in the NES original, ’98 takes on a form closer to that of a falling block puzzle, pitting you in a 1v1 battle against a computer or human-controlled opponent on one side of the screen and tasking you with lining up coloured panels into chains of 3 or more to clear them away. Chains of 4 or more will create an obstacle to trip up your opponent, ruining their combos and forcing them to re-think their approach to clearing lines by limiting the ways in which they can break certain panels. I can imagine this is quite similar to real demolition work, especially the sentient construction vehicles that can be summoned to get in your way.

The cast of Wrecking Crew ’98 is a strange one; beyond the usual suspects of Mario, Luigi, Peach and Bowser, as well as a handful of foes from the original Wrecking Crew such as Foreman Spike and the Eggplant man, the game’s playable roster consists of some of the most bizarre characters ever seen in a Mario game, and certainly not the types you’d expect to see in Mario Kart. We’re talking about beloved Mario characters ‘Dogu‘ the clay figure, ‘Onnanoko‘ the little girl, ‘Oyazi‘, a depressed old man, and most importantly ‘Onigiri‘, a sentient ball of rice. These are weird but fun additions that spice things up a little, and considering this is a pretty out-there take on demolition anyway, I don’t think having bizarre characters takes away from the game at all. Who needs Rosalina anyway?

As if this take on Wrecking Crew couldn’t get any better, it comes with the original NES game on the cartridge too! It’s a real shame that this title never saw the light of day in the west (and not because the light was being blocked out by one of Bowser’s high-rise buildings either) and whilst the game has yet to see a Virtual Console release in any region, it’s titles like this that make me wish Nintendo would run a Hanabi Festival like in the Wii days. 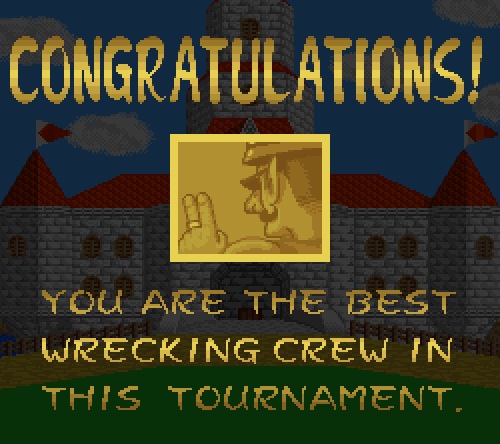