Hitler was a bad guy. It’s hardly a surprise, all things considered, that the majority of his video game appearances have seen him take on the fitting role of bad guy. Be it the titular Hitler of Capcom’s Top Secret: Hitler’s Revival (better known as Bionic Commando), the iconic cyborg Hitler seen in Wolfenstein 3D or the skeleton-summoning Hitler of the Atlus-published RPG Operation Darkness, it seems that the common trend found throughout most of the moustachioed dictator’s virtual appearances is as follows; Hitler comes back from the dead, does something suitably sinister and proceeds to later die, generally in the most gruesome fashion possible. 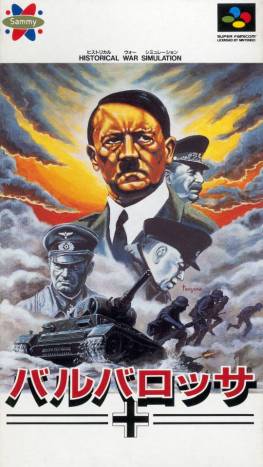 But what about the exceptions to this rule, the games where the führer’s head doesn’t explode at the end? Released for the Super Famicom in 1992, Barbarossa is one of these games. As a matter of fact, it has Hitler’s head looking quite thoroughly intact – and unsettlingly heroic – on its front cover.

The game was developed by SystemSoft Alpha Corporation (occasionally going as simply ‘SystemSoft’), a studio with a rather uneventful track record as far as commercial releases go who champion a unique niche of developing strategy games aimed at an audience of Japanese military enthusiasts largely shunned in their tastes by Western-made historical strategy games that portray the army of Imperial Japan as villainous members of the Axis powers. Only a handful of SystemSoft’s titles have ever made it to the West, primarily as a result of both the company’s system of choice being the Japan-only PC-98, as well as the controversial political nature of many of the games themselves – Barbarossa understandably falls into this category.

Barbarossa gets its name – and premise – from Operation Barbarossa, a military campaign by Nazi Germany to invade the Soviet Union. Thirteen missions set across Europe allow you to play out the campaign in its entirety, culminating in the Battle of Berlin, the war’s final major offensive that led to the destruction of Nazi Germany. Surprisingly, this is hardly an original concept for this kind of strategy game – a very similar title that also portrays the Nazis as a playable force, Koutetsu no Kishi (Steel Knight), was released a year earlier than Barbarossa and plays out in an almost identical fashion. Historical accuracy is clearly desired by the game’s audience – a scripted defeat concludes the game to make sure things play out just as they did in real life, something that offers little moral comfort to the obvious qualms that come with waging virtual war on behalf of a fascist regime. 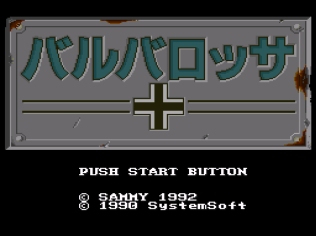 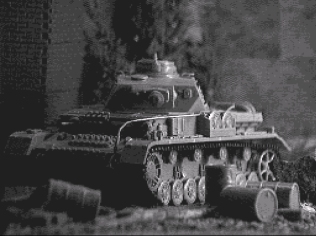 From a more casual perspective to advanced wargaming, this controversy works strongly in Barbarossa’s favour – without it, the game does little to garner interest from more than the most specialised of audiences. Sluggish, hexagon-based movement, sophisticated unit management performed through menus that are less than pleasing on the eye and complicated mechanics such as changing degrees of wind severity are most likely a dream come true for those who take these kinds of games seriously. To anyone lacking this rather focused field of interests however, Barbarossa is probably going to be about as fun as a January spent on the Eastern Front. Even brief, photorealistic cutscenes between missions do little to ease the mind-numbing tedium, all the game has to offer for those who aren’t ‘in the know’ beyond its eye-catching cover artwork. 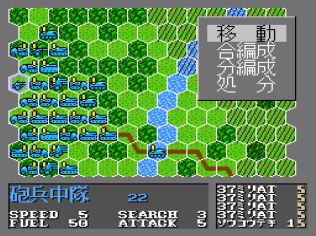 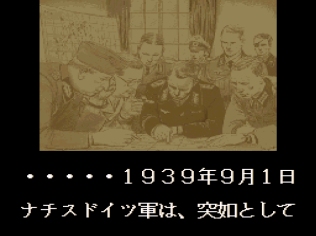 In spite of this, Barbarossa is a game that must be applauded for its depth, especially as a home console release in 1992. A noteworthy level of detailed customisation is available for each and every unit, with the expected factors of ammunition, fuel and terrain requiring close administration if you plan to overwhelm your Soviet opponents. Beyond these elements, it’s difficult to find much to praise the game about, but it’s important to consider that this is a title that likely wasn’t made with you or me in mind. 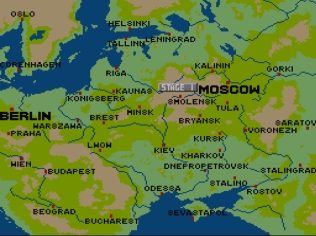 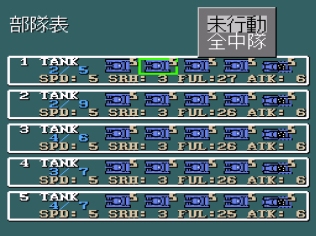 As a matter of fact, this is perhaps the most impressive aspect of Barbarossa’s design – it shows that SystemSoft clearly know their audience, something evidenced by the fact that they’re still making hex-style strategy games to this day. By sticking to their guns and catering to a small yet dedicated crowd, they’ve succeeded in filling a gap in the market and capitalising on it for over thirty years. Outside of this, however, their luck runs short; even amongst the most devout Western fans of the strategy genre, you’ll be hard-pushed to find anyone who truly appreciates Barbarossa for anything more than what it is – a game with a weirdly detailed picture of Hitler on its cover.