This is the first entry in a series of regular posts I’m planning on making that aim to give you a little window into gaming culture; be it apparel, artwork, events or music and of course, the games themselves, this weekly feature will cover a selection of photos, videos and writing from around the web and beyond in a more casual, free-form style that I hope you’ll find enjoy!

I highly recommend checking out the sources for everything featured, because you can be sure there’ll be more good stuff where they came from.

Legendary video game composer Yuzo Koshiro, well-known for his unforgettable soundtracks featured in titles such as The Revenge of Shinobi and Streets of Rage amongst a whole host of others, can be seen here trying his luck at a gachapon machine dispensing FM sound chips. I’m no expert on the technicalities of music-making, so I couldn’t say if it was 500 yen well spent or not, but Mr. Koshiro seemed pretty pleased with the Yamaha YM2151 inside the capsule! 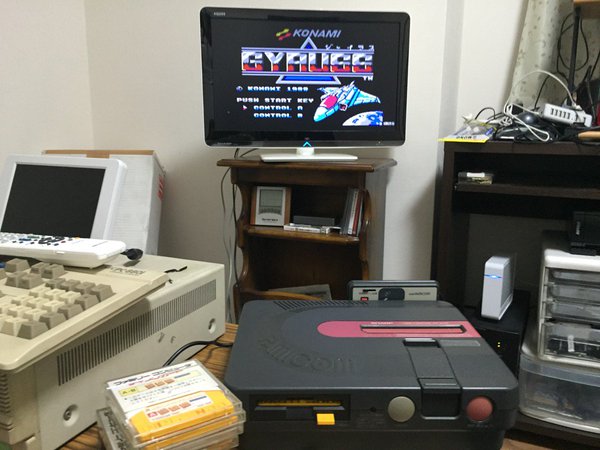 It seems like wrockn_, a presumed fan of Mr. Koshiro, decided to gift him a Sharp Twin Famicom. He’s been playing some Gyruss and Akumajō Dracula and I have to say, I’m a tad envious of that nice stack of Famicom Disk System games he has on the desk!

This gives me the chance to segway into a shameless plug of my own recent Twin Famicom acquisition! It’s a very attractive system in the flesh and I’m looking forward to bringing you plenty of coverage of the weird and wonderful titles it has to offer. That is, if I can pull myself away from the temptation to just take glamour shots of it all day!

You can’t help but feel sorry for this shelf of broken Xbox 360s lined up in the junk section of Japanese hardware store Hard-Off. This slightly glum looking shot caught my eye amongst wrockn_’s pictures;  it’s a sorry sight and testament to the 360’s lack of success in Japan, with these particular systems being sold for parts at as low as £5 a pop. If that boxed Saturn peeking out at the top of the shelf is a similar price though… Well, I might have to get on a plane!

Luckily, there are people out there who make it their job to give old consoles a new lease of life; robopanda777 has built some of the best-looking custom Game Boy units I’ve ever seen! His Instagram is criminally low on followers, so go and give him a follow there and on Twitter, where he posts some great LSDJ vines!

I also highly recommend giving this fantastic remix of ‘White Land’ from the original F-ZERO a listen, arranged by 2mg and recorded using one of Robopan’s modded Game Boys!

Cute little electronics store BEEP appear to have had some sort of Xevious-fest last week, setting up Namco’s classic and influential side-scroling shooter on seemingly every platform under the sun! There’s something really charming about that dated-looking vertical display setup on the far right!

On the topic of Japanese stores doing fun things, design store METEOR appear to have recently been selling some homemade Famicom Takoyaki. It looks delicious and the labels are a nice touch that I couldn’t ignore!

Whilst not strictly gaming-related, there was also no way I could ignore these stylish stickers designed by U井, whose artwork you may recognise from the 2015 My Famicase Exhibition, which is organised by METEOR. Unfortunately the stickers appear to be completely sold out, but you can still browse the collection over at the MHz Online Store.

As displayed in this nice shot by pomegd, it seems that Japanese shoe company ANIPPON have shipped out their line of special SEGA console-themed trainers. The pair pictured is the ‘Dreamcast MODEL‘, which if you ask me is the best looking out of the bunch, although you can check out the Mega Drive and Saturn versions and judge for yourself.

I felt the need to share this awesome MVS/SuperGun setup from the aptly named kicksomeassnet; I couldn’t comment on whether or not a Saturn controller is the ideal controller of choice for Real Bout Fatal Fury 2, but it certainly looks cool, so it’s all good in my books.