During the 16-bit era of gaming, beat ’em ups were a dime a dozen. Finally gamers around the world could play faithful recreations of their favourite arcade games in their own homes, so it’s no surprise that some of the most popular titles, many of which were beat ’em ups, would be some of the first to make the jump from cabinet to cartridge form. Many tried and failed to emulate the success of the likes of Capcom’s Final Fight and SEGA’s Streets of Rage, in some cases outright copying them, but every so often a title in the genre would come along that stood on its own two feet; perhaps it innovated in some way, or maybe had simple thematic differences to the commonplace punk-bashing seen in the more popular titles, but in any case, these games would always be a point of interest for fans of the genre.

Melfand Stories is precisely one of these titles. Released exclusively in Japan in 1994 by Sting Entertainment, who most notably developed a variety of lesser-known fantasy titles such as RPGs Dokapon Kingdom and the gorgeous-looking  Yggdra Union for Game Boy Advance (a title you can expect to read more about on Minus World at some point in the future), Melfand Stories offers what at a glance appears to be a simplified take on a fantasy beat ’em up, but in fact offers a deep and rewarding experience for up to two players, through fun scrolling action, attractive visuals and a diverse lineup of characters, each with unique play styles to accommodate a wide variety of beat ’em up fans. 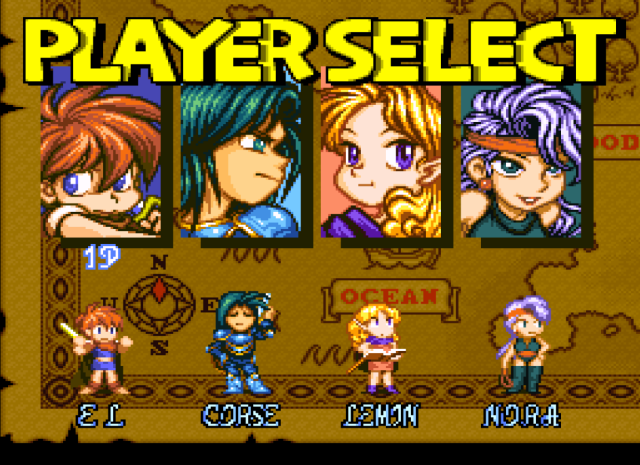 Whilst the game remains untranslated from its native Japanese, the plot appears to be your standard fantasy affair; four heroes have been called upon to defend the kingdom of Melfand from the clutches of a band of monsters and fiends, commanded by the evil Nomolwa. The four characters – El, the all-rounder who wields a sword, Corse, a slow but powerful fighter who uses a spear, Lemin (no relation to the similarly-named revolutionary, I’m afraid; if you’re looking for a Super Famicom game to quench your thirst for virtual Communism, I recommend Street Fighter II) who uses a magic rod that can vary between close-ranged and projectile attacks, and finally Nora, the speedy whip-user reminiscent of a 90s anime version of Castlevania‘s Simon Belmont – each operate differently both in performance and attack style in accordance to their weapon, adding some nice variation for multiple play-throughs or co-op gameplay (although it is possible to change character on death). As well as the game’s preset fighting styles, various pickups are available that allow you to perform one-time magic attacks with diverse effects, ranging from unleashing a flash of lightning to clear the entire screen of enemies, to more concentrated attacks such as bursts of fire or tornados. It’s undoubted that the question of who will get to wield this might powers will be a source of much co-op in-fighting, but once you realise how useful these powers are when you’re swarmed by enemies and in a real pinch, you’ll be glad they’re there.

Whilst stages are fairly linear in their design, you’ll find yourself fighting off a wide variety of enemies, ranging from pestering bats and harpies to pirate lizard-men (a cue taken from Donkey Kong Country‘s book, perhaps?) and giant Sarlaac Pit-esque sandworms. Each stage has two bosses and carries a unique thematic element with its own unique obstacles to overcome, ranging from your regular old fantasy plains and forests filled with pitfall traps to castles inhabited by swooping demons, once again reminiscent of Castlevania.

Every stage is beautifully illustrated using the game’s sprites which contain a ridiculous amount of detail; everything from the gentle movement of the clouds in the sky to the sway of feathers that float to the ground after you slay a winged enemy create a convincing and attractive fantasy world, despite the game’s ‘chibi’-esque art style. Layering techniques work together to create the satisfying sight of enemies leaping from a ship in the distance, or the puzzling but immersive image of intertwining staircases that criss and cross across the corridors of a haunted castle. The Super Famicom’s Mode 7 function is used to great effect during boss battles, advance scaling working just as well to portray the convulsing tentacles of a fearsome kraken or the dazzling sight of a griffin swooping in from the horizon. Character and enemy designs are unique and their animations portray varied and likeable personalities, even in their simplicity. This crazy level of detail even carries across into the sound design; enemies even jeer or cackle as they snatch away one of your precious lives. This is a game that truly makes use of the hardware’s capabilities, and truly benefits from it.

The game’s progression offers wide potential for replayability, splitting the map off into different ‘paths’ that offer varying difficulties and locations to challenge. Frequent minigames and bonus stages, many of which also make use of Mode 7, break up the gameplay and add fun incentives to gain extra lives and power ups, often working into the plot quite nicely too. This is an easy recommendation for a co-op title; it’s more accessible than most beat ’em ups, removing the requirement for remembering complex inputs and using a simple two-button attack system (attacking and blocking are both assigned to one button, depending on the length of a button press, whilst special attacks such as magic are assigned to the second button), whilst still offering considerable challenge in its branching route structure and ever-changing enemy attack patterns.

Among the Super Famicom’s large beat ’em up library, Melfand Stories really is a standout title. Unreleased on any other medium such as the Virtual Console, if you’re looking for a solid co-op or single player experience, or even just want a really good-looking SFC game to play, it’s worth tracking down an original cartridge copy. Whilst complete copies have achieved a rather high value online, investing in a cart-only copy should be enough to satisfy those looking for an excellent quality fantasy brawler full of originality and detail. This is a game that deserves more recognition.