A certain beauty can often be found in simplicity, and more often than not the designs of old consoles display this in full force. This unique, almost space-age Famicom setup was photographed by masskutt at the Pixel Out exhibition, held at the Pixiv Zingaro gallery this month. Despite seemingly belonging to some kind of Famiclone machine, the controllers really stand out with their half-moon design and retro colour scheme. There’s something irresistible about that little CRT too! 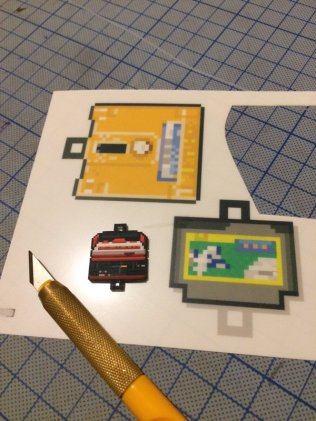 Sticking to the topic of the Famicom, but perhaps with a more bizarre approach, I found myself admiring these cute pixel art designs put together by rurue0111 featuring a Famicom cart, Disk System and Disk, which appear to be some kind of charm or ornament (you’ll find many similar fan-made gaming handicraft under the hashtag “8bit_shugei”). However, what followed this seemingly innocent display really caught me off guard…

…watching them get shoved into an oven and burnt to a crisp! Perhaps the context of such a shocking move has gone over my head, but regardless, I have to say it caught me off-guard. I can safely recommend that you don’t do this to any real Famicom cartridges, or else I’ll probably never recover…

Now to some less burnt but perhaps equally sombre retro-game inspired handicraft, 8bit_mariosan’s original sprite ornament displaying post-defeated ghost forms taken on by the protagonists in Mother (released in the west as EarthBound Beginnings) makes creative use of transparent beads and the stocky but charming spritework of the 1989 cult RPG classic to create a unique, totem-like decoration. Perhaps this might be a good one to get out come halloween time… 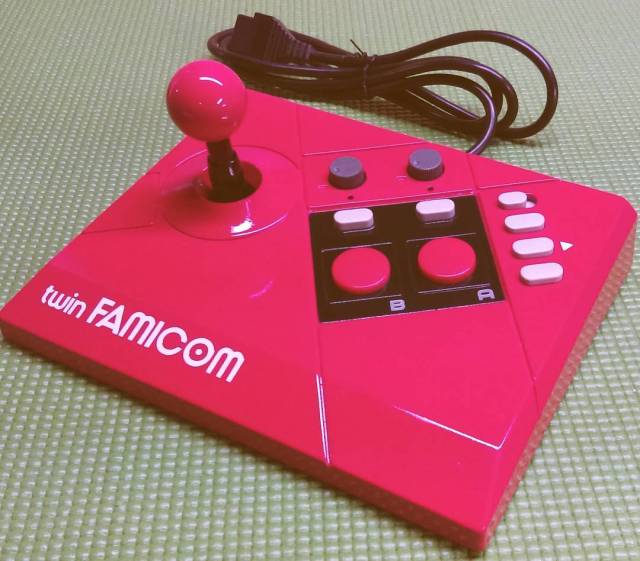 Now from custom-made decorations to customs with a more practical use; Robert Dunn‘s custom controller and arcade cab work is a spectacle to behold, especially his brand new ‘Kawaii-cade’ mini arcade cabinets available through a brand new Kickstarter campaign. However, what caught my eye last week was this custom commission mod for a Twin Famicom-inspired NES Advantage joystick. The striking red colour scheme seems like almost a total departure from the NES original’s more tame grey and black tones, and it really makes you wonder how the Advantage and other NES-exclusive accessories would’ve looked had they been released alongside the Famicom as well.

Maintaining an impressive games collection is hardly an easy feat; it can often require near-constant maintenance, careful financial management and not to mention a great deal of space. However, miki800 may have found the perfect solution for you; replace your entire collection with eraser versions of your favourite Nintendo titles. Be it Game Boy Advance, SNES or GameCube titles, these cute little keshi have you covered, even featuring authentic miniature versions of the game boxes reminiscent of the GBA Famicom Mini series packaging. You can check out some more of the erasers, which also include boxes modelled after DS games, over at vamp_angel555’s great Flickr page.

Finishing off on the themed eraser trend, toychotomy (who has an impressive collection of character eraser figures himself) posted a fitting snap of Ryu and Ken from the now vintage Street Fighter II-themed keshi line. This picture finds itself being particularly fitting as we fast approach the release of the March update for Street Fighter V, bringing with it fan favourite combatant Alex, as well as a whole host of single player content that, much to the disappointment of many, was nowhere to be seen at launch. Whilst its unlikely we’ll ever see a return of Street Fighter-themed collectable erasers any time soon, it provides an interesting window into the Street Fighter II craze that firmly grasped the arcade scene across the world.