Phoenix Wright can’t catch a break. Not unlike a Japanese-made, courtroom-dwelling version of Murder, She Wrote‘s Jessica Fletcher, Capcom’s big-voiced comeback king attorney is seemingly followed by trouble, normally of the legal kind, wherever he goes (the two also appear to share a fondness for outlandishly big hair). This is no different in his sixth mainline outing, Phoenix Wright: Ace Attorney – Spirit of Justice, which takes the series’s trademark courtroom drama to an exotic new location, which presents our justice-seeking hero with more challenges than you might initially think.

Set primarily in the fictional Himalayan monarchy of Khura’in, in which magic stands as court precedent and lawyers have been done away with in favour of seance rituals that project the final moments of the deceased, it’s clear that Wright is, once again, completely out of his depth. Whilst it’s not hard to feel sympathy for the guy every time, it’s a relief to find that the judicial misadventures of the Ace Attorney series have once again shaped themselves into an engrossing and well-structured visual novel that puts a theatrical spin on the otherwise mundane. 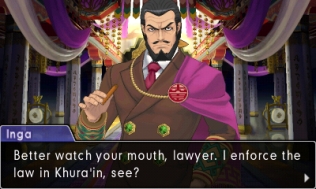 It is the aforementioned magical seances that provide the biggest shake-up in the courtroom this time around. Perhaps more ground-breaking narratively than from a gameplay perspective, the process of witnessing that crucial instance seconds before a victim’s passing  introduces a new wildcard element to your legal battles, offering what at a glance appears to be faultless evidence that proves the accused’s guilt. Of course, this being Ace Attorney, this evidence is not without some kind of flaw or oversight; it’s up to you to pick apart even the smallest inconsistencies by looking at the words heard and senses felt in each scene. This certainly adds a fresh layer of surreality to the legal experience – although any long-term fan of the series will know that encounters with the extraordinary are nothing new – and its importance to the overarching plot diminishes its presence as purely a gimmick and crafts it into a more relevant aspect of your time under the authority of Khura’in’s legal system. 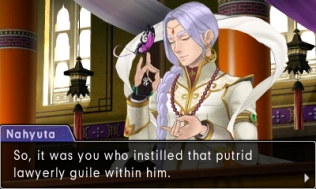 In spite of its solid integration into the story, those who are inclined to the more grounded elements of Ace Attorney‘s court battles – pressing witness testimonies, questioning suspects and other elements you’d be more likely to come across in a real life courtroom – the introduction of yet another, increasingly outlandish method of determining the truth may come as a source of discontent. Whilst perhaps one could argue that if these areas in Ace Attorney‘s thematic repertoire are not to your liking, you may be best suited to passing on the series altogether, those who at least seek a more familiar, less spiritual experience from Spirit of Justice will no doubt be pleased at the introduction of a second, coexisting storyline set in ‘America’ that temporarily pushes the rituals over to one side and makes use of a fair few recognisable faces. Whilst these chapters of the game’s story are not entirely gimmick free themselves, making use of gadgetry and psychological tricks employed in previous entries to the series to spice up age-old legal processes, the mere presence of some more intimate locations and  will no doubt help to soften the blow of an otherwise substantial upheaval.

In true Ace Attorney fashion, it’s through both the writing and characters – familiar and otherwise – that Spirit of Justice procures most of its charm. The appearance of cast members from throughout the series’s history – Apollo Justice and Trucy Wright from Apollo Justice: Ace Attorney, relative newcomer Athena Cykes from 2013’s Dual Destinies and the anticipated return of Wright’s original assistant from the first game, Maya Fey, to name just a few – offer an appreciated bit of fan-service for those who have stuck with the series since its first appearance in the west in 2005. On the contrary, those who have chosen Spirit of Justice as their first point of contact may find themselves jumping at the deep end, with prior knowledge almost essential for full appreciation and enjoyment of some of the game’s scenarios. The game’s new personalities, especially the denizens making up the Kingdom of Khura’in, are appealing both in design and personality, with many a wacky personality (with equally wacky names to boot – Spirit of Justice is a fine showing of the series’ tradition of localised names coming in the form of puns of varying painfulness) taking to the stands, bringing about both compelling cases and plenty of opportunities to make you smile through their actions and words.

It’s reassuring to discover that the Ace Attorney series has in no way suffered in its departure from sprite-based artwork when transitioning to the 3DS. Each 3D model brilliantly accents some top-notch character designs (including re-designs of returning cast members, as well those showcased in assets re-used from the previous 3DS entry), still managing to capture the abrupt animation style of the original GBA/DS titles that brought so much charm and life to each interaction, inside and outside of the courtroom. A strong musical offering coupled with the series’s iconic sound effects help to create an audiovisual experience that makes Spirit of Justice particularly appealing as a visual novel, offering far more than simply text on a screen that those unfamiliar with the series may be expecting.

That’s not to say that the writing isn’t, as ever, a crucial aspect in determining the game’s quality. At its best, Spirit of Justice does well in delivering exciting, at times even nerve-wracking moments that will keep you hooked and, considering the implications brought about by a new setting, will make you root for the upholders of justice more so than ever. Sadly, the entirety of the experience does not capture this feeling – without giving anything away, certain points later in the game will have the potential to frustrate newcomers and veterans alike, something that drives each fleeting, more passionate moment to feel that much more special. Shifts within the series’s writing team are evident and attempts to capture what made the original trilogy of games so fresh and unique have yet to come full circle, but this certainly serves as one of the best attempts to date, even if the recurring tendency of the series to rest on its laurels has yet to be completely shaken.

Ultimately, players who have been following Phoenix Wright’s adventures up to this point would be foolish to overlook his latest adventure – and it’s unlikely they will. Many of the now familiar elements that have kept the series interesting and exciting over the years are on full display once again, and even if there’s nothing particularly revolutionary on display from a gameplay or writing perspective, fans can rest easy knowing that Spirit of Justice will likely provide on exactly what they’re looking for – more Ace Attorney. However, from a newcomer’s perspective, this is a game that may be best saved for a later date. Spirit of Justice succeeds in doing what past entries have done well, but a strong reliance on past knowledge of characters and in-game story occurences will likely leave the uninformed feeling unsatisfied by the overall experience. Whilst minor new mechanics and high quality, reasonably consistent writing are as appreciable as ever, Capcom should no doubt be wary of letting the series stagnate by falling back on its tried and tested methods yet again – the series has routinely been able to provide charming, funny and genuinely compelling experiences time after time, but after six mainline entries, it’s hard to shake the desire for some kind of more substantial evolution in what the games have to offer.