You might have noticed Minus World has been pretty quiet recently. Apologies for the radio silence, things have been crazily busy, but you’ll be pleased to know that the world of games culture never sleeps – here’s your latest look at a handful of its most creative and interesting offerings over the last month and a bit.

To start with something topically relevant, the Famicom Mini just released! As a matter of fact, at the time of writing it’s apparently sold out in Japan, and Instagram and Twitter alike are filled with pics of users re-living the good old days in miniature form. This shot by Mio9744 in particular caught my eye because it just looks plain nice, adding some ribbons into the equation.

This reminds me that you’ve only got a few days (two, as of the time of writing) to get your hands on this limited run MOUNTAIN GRAPHICS x Attract Mode shirt, which opts to turn the Famicom into a giant robot as opposed to making it smaller. Not much more to add really, it’s cool and you should buy one!

The instance I spotted this giant Famicom being assembled by Kaj2nd, I knew that whatever it turned out to be, it was going to end up on Culture Collection…

… but little did I know, however, that it was actually part of a genius three-man (or in this case, one man and two sons) Halloween costume. Nor did I know that the rest of the internet were going to beat me to sharing it! No matter, I’m sharing it with you now because it’s fully deserving of your attention, even if the season has passed. 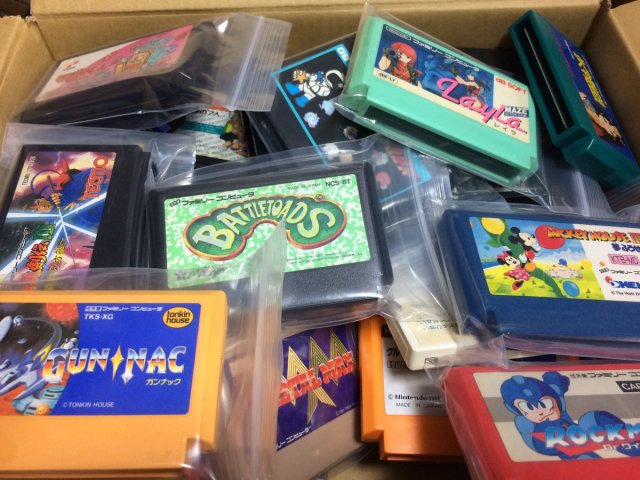 Twitter user _RKNK_‘s box full of Famicom carts was posted quite a bit earlier in October, but looking back on it, it gives me the idea of handing out old games rather than sweets on Halloween. It’s definitely better for your teeth, but I’m not sure how well the idea would go down in a natively Famicom-less part of the world.

Alternatively, as kotobuki_man demonstrates here, you could use your Famicom carts as some kind of offering to Hudson mascot Takahashi Meijin (AKA Adventure Island‘s Master Higgins). This striking yellow sofubi vinyl figure of Meijin was released earlier this year, an essential collectors piece for die-hard fans of the late Hudson’s brilliant Famicom output. They’re not easy to get your hands on, but probably not as hard as beating Adventure Island. 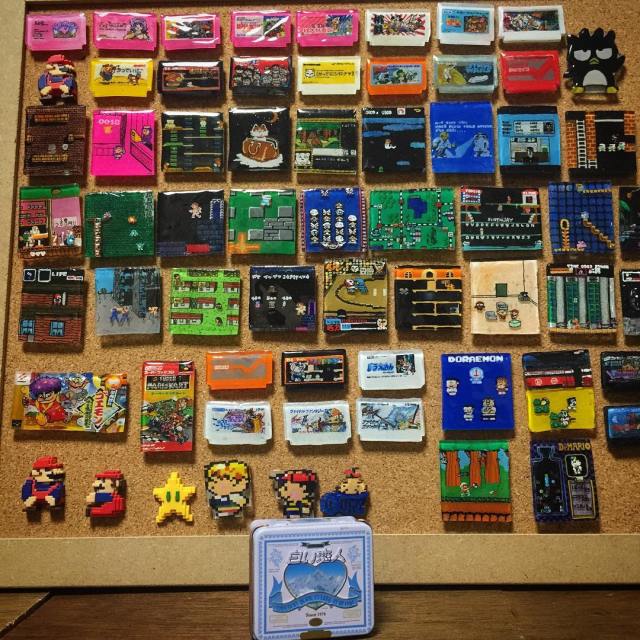 Miki7722 is actually the proud owner of two Famicom libraries! This might sound excessive to you, but it’s less crazy when you consider that one of them, pictured above, is designed to stick to your fridge… 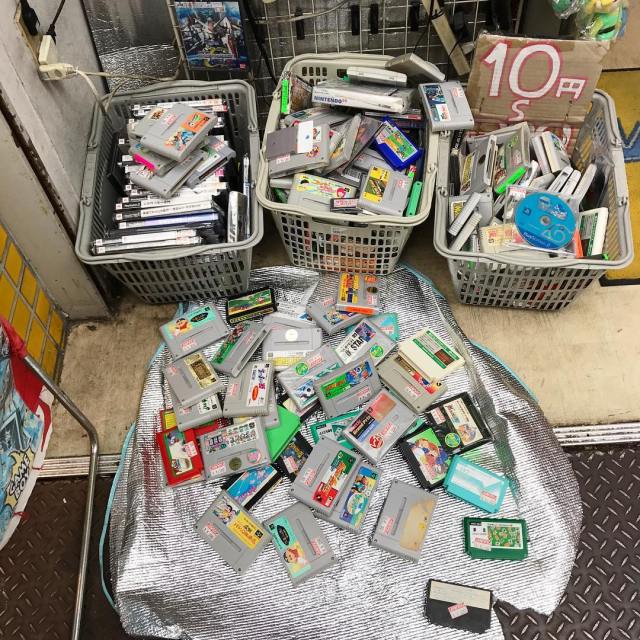 Last month’s Culture Collection highlighted a photo of Super Famicom consoles in a sorry state, and a few of you took to Twitter to express your anger and sorrow. Well I’m here to make it up to you with another Super Famicom-related pile, photographed by Brycecorp. These games are 10 yen each. Brycecorp could easily write “wish you were here” on this pic and sell it as a postcard.

Occasionally Brycecorp takes to the streets with a Sega Saturn on his back. It’s a surprisingly tasteful choice as far as wearing a console goes.

The Saturn seems to have had something of a comeback as far as merchandise goes, and the range of Virtua Fighter Figmas are among the coolest bits on offer. Of course, as stonyo_ shows us, even the most hardened fighters need to take a breather now and then.

Sometimes fighters are the best place to TAKE a breather. This shot by pipixvi brought Kyle Fewell‘s Console Cat print to mind.

If last month‘s Dreamcast controllers and this shot by ham64 are anything to go by, games seem to universally look great under neon lights.

Something else that looks great is Keita Takahashi (of Katamari Damacy and Noby Noby Boy fame)’s ink-less business cards. He says he doesn’t use them any more, but it’s interesting to observe how his creativity and innovation seeps through in more than just his games. 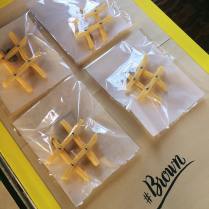 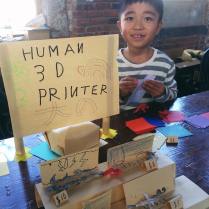 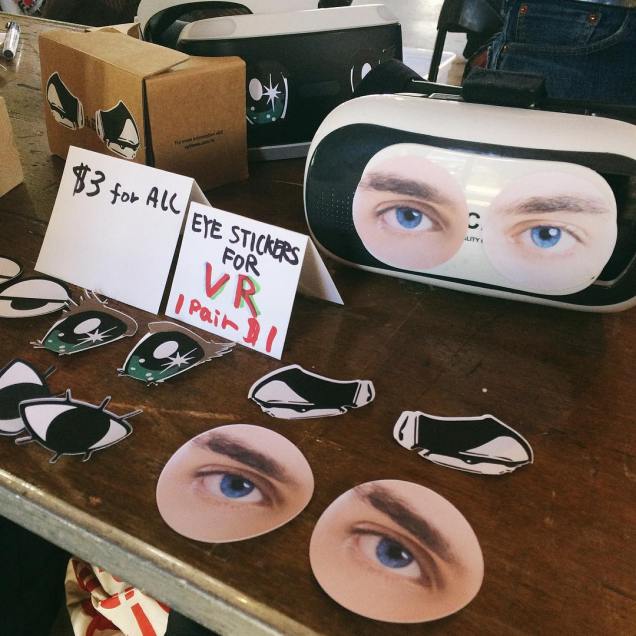 Matt Hawkins recently attended the Internet Yami-ichi (Internet Black Market), a flea market focused around ‘internet-ish things’, at which people take aspects of internet culture and bring them into the real world. I’d never heard of this event before, nor was I aware that it’s actually taken place in London in the past, but now it’s well and truly on my radar, and it should be on yours too. Some of Matt’s snaps are more gaming-related than others, but all are worth a look – you can see the selection over on his Instagram page. 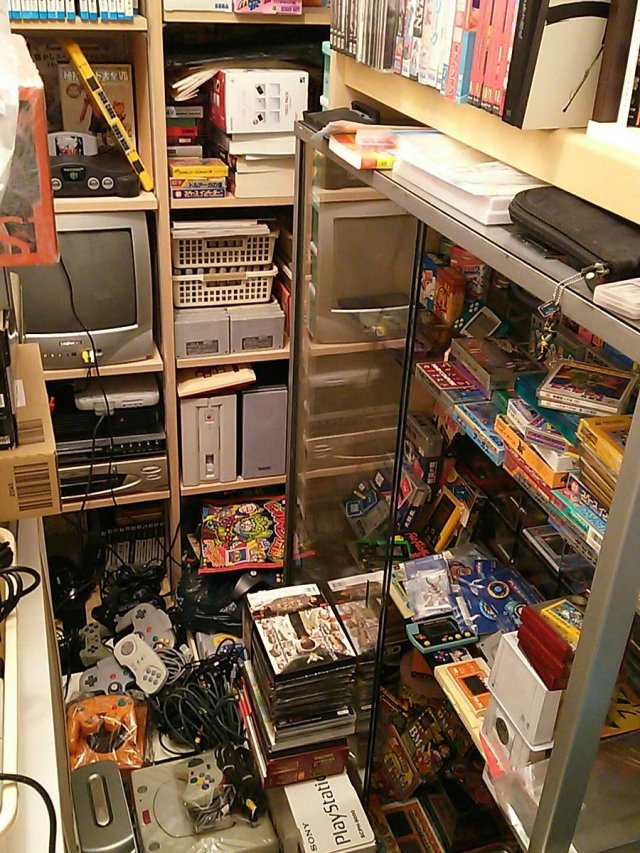 It wouldn’t be Culture Collection without a cluttered yet enviable games collection, this time belonging to Twitter user KonipapaMoerika, who was making an effort to get things tidy! 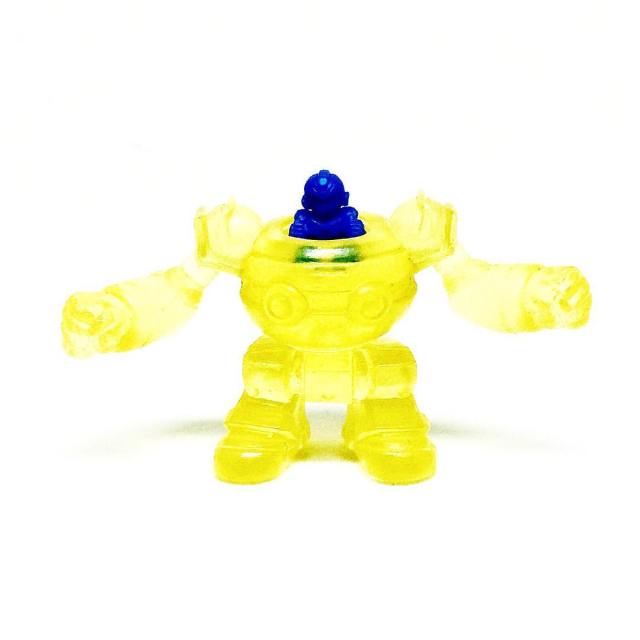 Mega Man X keshi from jiroij‘s collection. There are few times in life where wearing something transparent is a good decision, but on this Ride Armour, it looks pretty good.