Programmable Series – The Sounds Of Context

Audio in video games is an interesting beast to tackle. You’ve got background music to set the mood and enhance the environment. You’ve got sound effects for the actions players and characters perform within the game. You may even have voice acting to consider as well. It’s a lot to think about and although it’s only a piece of the game design puzzle, it can be one of the most important. The audio of a game can be what draws players in or drives them away.

Anyone who has ever played Marvel Vs. Capcom 2 will never be able to hear the words “I Wanna Take You For A Ride” without having flashbacks to the iconic audio loop that pounds away on the character select screen. Perhaps it is intended to make you select your character faster, because instead of making a careful and calculated decision you’re likely to just pick the first character that has some appeal and get into the fight – anything to get away from that song and avoid the oncoming headache. The same can be said about the music in the main menu for Cruis’n USA. You just want to pick your car and get going, to spare you any prolonged exposure to the horrible noise that is escaping your speakers and invading your ears.

Though these songs live in infamy, they are prime examples of something worth avoiding when choosing audio to accompany the start of your game. You likely don’t want the first thing your players hear to be a five second loop or a noise riddled mess – something inviting that will give your players a little taste of what’s to come often works best. If you have a main theme that will be played regularly through the game, you may want to create some variation of that song, perhaps a softer version or a remix that is more appropriate for the setting. Otherwise, something that captures the overall mood of the game will be more effective for easing players into the experience. You don’t need to try and blow them away with a crazy or bombastic number as soon as the game is booted up. 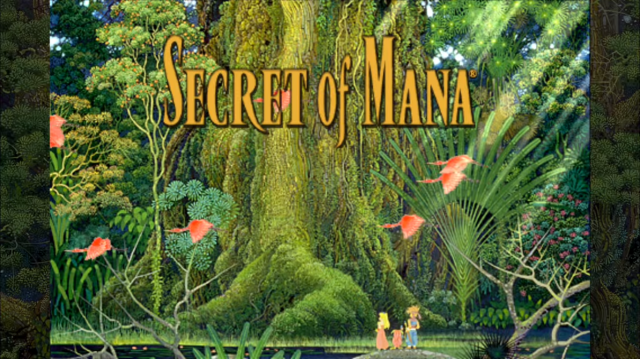 A great example of easing the player in with appropriate audio is in Square’s 1993 action RPG Secret Of Mana. The game’s opening song ‘Fear Of The Heavens’ not only sets the overall tone for the opening of the game, but is a very memorable song in itself. The rest of soundtrack follows with the use of piano and building synth sounds, varying between somber and upbeat moods, but always appropriate for what’s happening on the screen. Similarly, the first piece of music you are presented with in the critically acclaimed Journey makes use of string instruments and the simple sound of the roaring wind. This creative combination of a themed instrument and a sound effect in unison offers a unique reflection on the title’s audio and environmental design as a whole, embodying its open desert setting. Clearly, this isn’t the kind of music you’re likely to blast from your stereo while you drive to work, and it doesn’t aim to be. Rather, it offers a subtle, even forgettable accompaniment that perfectly suits the world it is intended for – something to enjoy while you wander said world at your own pace. Your soundtrack is a valuable tool for keeping players immersed in the experience you’ve crafted for them, so often the simplest approach is the best one to take.

Naturally, this applies to certain types of games more than others. What if your game is more action oriented, for instance?  Pianos and wind likely aren’t going to work for you. You may want to have more of a focus on fast and heavy guitars or synthesizers, like many first-person shooters did in the 90’s. The soundtrack to 2016’s Doom is one of the most notable examples of this approach in recent times. Metal and industrial-style music is very appropriate for the game’s tone and settings, and the use of simple or lighter compositions would no doubt have made far less of an impact. Doom would go on to win the accolade of ‘Best Music/Sound Design’ at The Game Awards in the year of its release, whilst a commercial release of its soundtrack was well received. It serves as a strong example of how context can be as important to a game’s musical direction as a strong composition itself.

Maintaining an appropriate sound stands true for your sound effects as well. Out of place sound effects can bring the tone of an otherwise serious game to something on par with a cartoon. Equally, it can make an upbeat and lively game seem flat or dull. If you’re designing a game with a more serious idea in mind you’ll likely want to stick to more “realistic” sounds. These sounds don’t have to be completely true to life but they should certainly be believable in their context. For example, you could bang on a desk and use the audio clip for knocking on a door. They’re not exactly the same action but the sound used in the alternative context works just as effectively.

However, replace that door knock with a car horn and no one is going to take your game seriously. It’s a little easier to get away with odd sounds when creating a retro style game. We all know when you jump or pick up a coin in your everyday life there is no beep sound that play,s but just about every game from the 8-bit era would have you believe otherwise. Retro-style games usually fall into the more “unrealistic” category where it’s acceptable to get a little silly with your sounds – it’s in their nature to be a little less realistic when you have to use much of your imagination to bring those pixelated characters to life. However, this standard comes with a degree of flexibility – games such as Flashback or Another World, which convey serious themes in a cinematic manner despite a dated visual style, still make use of realistic sounds as opposed to the expected ‘bleeps and bloops’.

The final element of sound design to consider is voice acting. If you plan to make use of the spoken word in your game, it’s important to be very critical of your actors’ delivery, as well as the dialogue you may have written. If a piece of your dialogue sounds awkward or unbelievable to you when heard aloud, your audience will likely feel the same way.  One of the most notable examples of voice acting gone wrong is Sega’s House of the Dead 2. Iconic for its poorly translated lines delivered in a way considered “so bad, it’s good”, it serves as the perfect material for some unintended humour, but is simply disastrous from a design standpoint.

Games with particularly large casts, especially RPGs, are often plagued with similar issues – naturally, not every actor will be perfect in their delivery. When looking at existing games with conspicuously bad voices, it’s difficult to understand where the voice acting process actually failed. It’s not always the fault of the person delivering the lines – sometimes the issue can stem from poor writing, or the actor could be given lines out of context, unaware of their place in the game. As with House of the Dead 2, a language barrier can often come into play as well. From a design aspect the best advice is to aim to make things believable first and foremost. If the delivery is not believable, then the message you are trying to convey is probably better left as on-screen text. You can let the player use their own imagination for the voices and still get your story across effectively.

Whatever game you build, sound is always going to be an important part of the presentation. You can choose to be subtle or loud, but you should always keep the player’s enjoyment in mind first and foremost. Keep your players immersed in your world and they’ll come back for more.