Nintendo’s Picross games are one of those titles that don’t have a strong history of success outside of Japan. The first game in the series to release in the west in 1995, Mario’s Picross on the Game Boy, was a commercial failure even with the help of the famous plumber and it wouldn’t be until 2007’s Picross DS that another title would grace western shores. Since then, the franchise has been reduced to several painfully overlooked but deviously addictive downloadable entries, including a number of non-Nintendo published iterations on the 3DS eShop. However, the big N have once again teamed up with Jupiter Corporation, this time using a much-loved IP to give the classic puzzler a monster-catching facelift; will the addition of Pokémon be enough to give Picross its chance in the limelight? 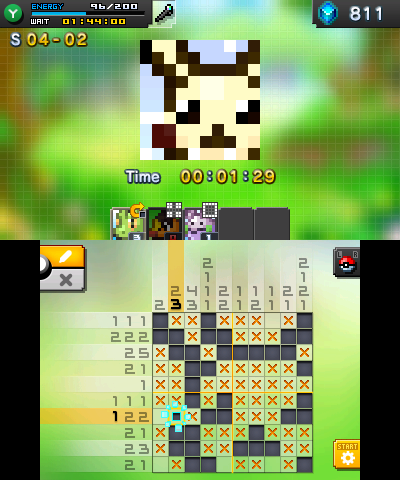 It’s interesting to note that this is yet another ‘free-to-start’ venture on 3DS to make use of the Pokémon IP; I’ll go into more details about the specific bearings of the free-to-play business model on this particular title within the review, but I feel it’s important to comment that the trend of free-to-play Pokémon titles makes it quite clear that this is an IP Nintendo are willing to experiment with; the universal appeal and widespread brand presence of Pokémon make it ideal for this type of title, one which would otherwise fade into relative obscurity; there’s low risk and high potential reward and in some ways, this really could be a potential lifeline for Picross, which has always been overshadowed as a Nintendo-published puzzle game.

First things first; the game’s tutorial is brilliant. It’s simple, but incredibly effective at explaining the otherwise somewhat confusing concept behind Picross. Unlike a conventional puzzle game (or even your average logic puzzle such as sudoku), Picross essentially presents you with a blank grid to work in, which understandably can be a bit daunting for first time players, but luckily the game’s opening section runs you through all the skills and lingo you need to make it through the game’s puzzles. That’s not to say it’s easy, of course, but it does a much better job at easing you in to a game that genuinely does require some explanation and perhaps even some trial and error at times to ‘click’ in your mind.

However, this is where the game’s unique Pokémon-themed gimmick comes into play; past the tutorial, each puzzle represents a catchable Pokémon that have unique special abilities. In some ways, these abilities are almost like ‘cheats’, giving you hints about block placement, automatically fixing your mistakes or even completing part of the puzzle for you. However, this adds something fresh to the Picross formula that serves as both a creative way to integrate Pokémon without being overbearing, as well as keeping each puzzle fresh and opening up your options for approaching it. It’s entirely possible to clear each puzzle using simple logic, as intended; after all, every puzzle does have a solution that could be achieved the same way you would solve a pen and paper one. However, the Pokémon abilities are a nice thing to have for when you’re well and truly stumped, something not necessarily needed, but not an unpleasant addition either.

However, it’s with the Pokémon that the game’s free-to-play mechanics come into the light; the entire game is operated around a currency called ‘Picrites’, which of course, can be purchased in bulk for real dosh. Picrites are necessary for increasing the number of Pokémon available in your party, re-filling an energy meter that is expended with every mark on the puzzle grid, reviving party members who have enterered some kind of tiredness state (often with base revival times of around an hour, similar to the ‘stamina’ function you would find in gacha games such as Puzzle & Dragons) and even unlocking new puzzles. I can understand why they’ve tried this model, but honestly, it’s just a nuisance.

Picross is a game with hundreds bite-sized puzzles that you can sink into, individually or en masse. It’s the sort of game that’s equally as good for a long plane journey or a short bus journey, it can be engrossing but it can also be a quick time filler. Now there’s no shortage of puzzles in Pokémon Picross and the difficulty is as fiendish as you’d expect, but this whole ‘energy’ and ‘Picrites’ system just gets in the way. Knowing that you can only do so many puzzles in one burst is a real hit to any motivation you might have to play, limiting your options and forcing you to micromanage your party of Pokémon as opposed to focusing on the puzzles. Of course, the option of purchasing this currency and upgrading your energy meter still stands, but for the amount of money it would cost to buy the highest amount of ‘Picrites’ which essentially allows you to bypass the energy system, you would end up spending a lot more than you would on a standalone PICROSS e game for a similar number of puzzles. As a matter of fact, going by UK prices, you could buy yourself a used copy of Picross DS and Picross 3D and have access to almost 600 puzzles with no catch for less than the cost of 4000 of Pokémon Picross‘s virtual currency.

There are many ways to earn ‘Picrites’ without spending a single penny, completing puzzles being the most obvious method. On top of this, each stage has a series of ‘challenges’, bonus requirements such as the use of certain Pokémon types or special abilities, which give you a small bonus on top; a nice addition for completionists, that’s for sure. As well as this, daily training puzzles are available courtesy of the pixellated Professor Tetra; these are quick-fire, consecutive puzzles that test your quick thinking and stylus-using skills, forgoing the Pokémon or even any pictures in the puzzles and focusing on numerical ability. I honestly went into this hoping for some more traditional Picross gameplay, but unfortunately it literally was more of a training exercise, again awarding a measly sum of ‘Picrites’ as a reward. If this style of puzzle had been fleshed out into a full additional mode, I could see it being a great addition, although considering the puzzles are daily perhaps it will take some more time to see if the difficulty and rewards are ramped up in any way. 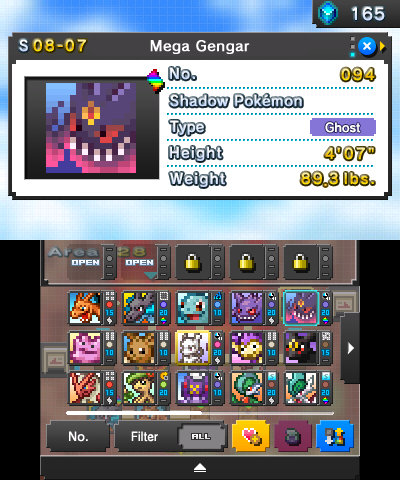 Ultimately, Pokémon Picross is a disappointing title; it’s disappointing because it’s a great Picross game, a great Pokémon spin-off and a fiendishly addictive puzzler ideal for the 3DS, yet all of this is held back by the introduction of the free-to-play business model. I feel that whilst this is an interesting and understandable experiment with the model, a more effective way of selling this title as a free-to-start game would have been to follow the example of Fullblox/Stretchmo, offering small level packs to keep players coming back for more. Picross fans will likely be left discontent, a great entry to the series hindered by mechanics that simply aren’t suited to this style of puzzle game. If you’re willing to put up with time limits and waiting times, then you’ll find a slow but good Picross title. looking for a more solid Picross experience, I’d recommend investing in one of the many PICROSS e titles available on the eShop, or even Mario’s Picross on the Virtual Console.

Sadly, I have to wonder that if it wasn’t for the free-to-play model, is this a game that would generate much interest on its own beyond that of the most dedicated puzzle fans, or would this idea have even been greenlit in the first place? Regardless, this is a game that comes so very close to being brilliant, but unfortunately falls short.