I like to consider myself something of an enthusiast when it comes to quirky Japanese game stores and whilst I can’t claim to have visited many of them, I can’t help but admire the way they do things over there, especially when it comes to presentation. This great haul shot from hassito, featuring a variety of great items purchased at BEEP, a gaming store that stocks a fantastic selection of games old and new, as well as memorabilia and other collectors items, is noteworthy in itself, but there’s something incredibly eye-catching about that BEEP-branded paper shopping bag design displaying a stylish array of minimalist consoles!

Of course, I couldn’t bring up cool Japanese shops without mentioning METEOR, who have recently filled their shelves with a highly sought-after restock of EDITMODE‘s Splatoon clothing line, which we covered a few months back. I feel like if you left Splatoon amiibo lying around in public in any other part of the world, they wouldn’t stick around for very long, but it’s undeniable that they make a brilliant choice of display piece! That said, if new NCL president Tatsumi Kimishima‘s recent words in an interview with Time magazine are anything to go by, making shop displays, much like collecting, are not the intended purpose of amiibo! 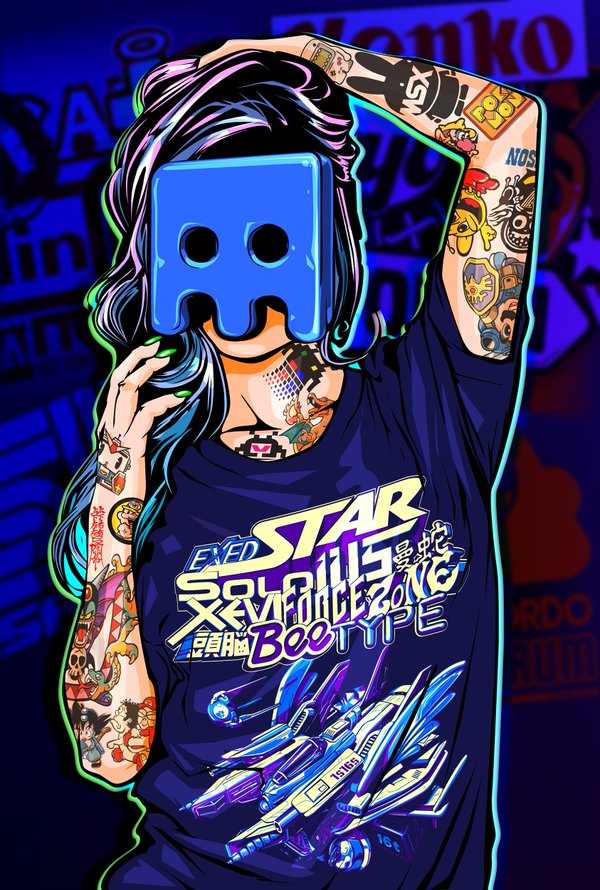 MOUNTAIN GRAPHICS, a Japanese graphic design studio who have created a notably large collection of brilliant pop culture character mash-up images, as well as selling apparel over on their web-store, have recently designed a range of clothing such as t-shirts and hoodies that are for sale in the METEOR store! Fittingly, they’ve designed this fun piece of artwork featuring both one of the shirts in question and METEOR’s logo, which seems to appear in some kind of hilarious humanesque form! 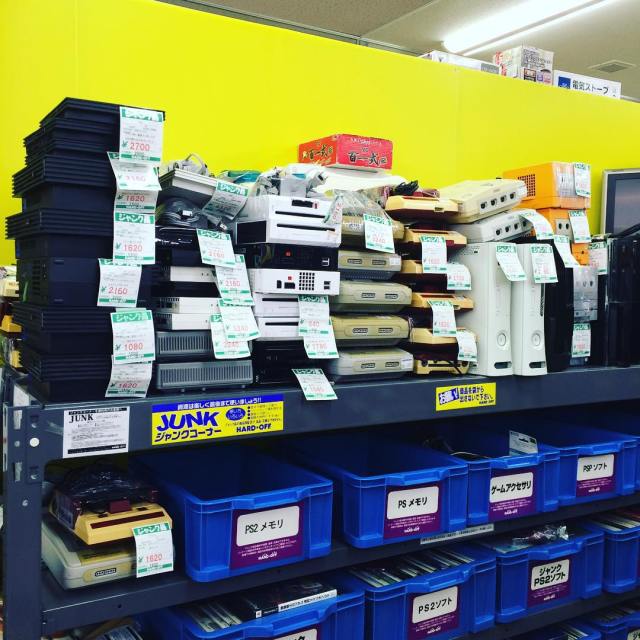 This next Japanese store isn’t so much a gaming or design shop, but is in fact Hard-Off, the questionably-named used hardware store notable for being a supposed treasure trove of cheap Japanese retro consoles. Now whilst it’s likely that many of the systems in Bruce Collins‘ picture might not be in working order, it has to be said that this is quite the sight to behold for anyone who takes pleasure in the physical aspects of game systems. Consoles from almost every generation are available, meaning that once again the Xbox 360 has managed to sneak its way into one of these articles, even if it is in the junk pile (again!).

It’s not just consoles though; whilst you might not be able to get away with a wall of Famicom games in your home, it’s not hard to appreciate the sight of this cabinet housing some of the more valuable titles available. Such classics as Super Mario Bros. 3 and cult favourite Mother are proudly on display, as well as a copy of Paper Mario: The Thousand-Year Door which has somehow snuck its way in there! What’s even more enticing than the games behind the glass is the site of all those other bagged up Famicom and Game Boy carts over to the right; certainly envy-inducing!

Many of the Famicom games in that cabinet are undoubtedly rare, but it’s unlikely any are as rare as this gold Famicom Disk System disk shared by kazzycom that went up for auction this week. Whilst the game in question, a Mahjong title, isn’t likely to be the greatest entry in the FDS’ library, there’s something undisputedly grandiose about that gold finish, not to mention that neat little Diskun-shaped housing to keep it protected from the elements.

It wouldn’t be a proper Culture Collection if I didn’t bring you something handmade (I’m already setting up the precedents after only 5 instalments!) and I’m happy to be able to show you yet another fantastic piece of Mother-themed craftwork from birosama1217. These hand-carved stamps featuring a variety of Mother characters are a cute way of giving your letters (or other stampable material; I won’t pretend to be an expert on this one!) a bit of Itoi-approved flair, or if you’re feeling in an adventuring mood, the old man from The Legend of Zelda has snuck his way in there too; likely the ideal stamp to use if you plan on mailing your friends a wooden sword to start their very own adventures with!

But it doesn’t stop there! In case you haven’t realised, birosama1217 is quite the Mother fan, to the extent that they’ve even got a Mother-themed christmas tree! The idea of using cute little Santa hat-toting Mr. Saturns and present sprites taken straight out of the game is ingenious and topping the tree with the living pile of vomit Master Belch is likely a much greater talking point than a mere angel or star!

From the very old to something brand new; this week Sony dazzled us with a plethora of announcements at the PlayStation Experience, held in San Francisco. Whilst not a brand new unveiling, one of the more notable showings for fighting game fans was The King of Fighters XIV, the first title in the series in almost 6 years. Whilst some are dubious about the switch from 2D sprites to 3D models in this latest instalment, the promise of 50 characters and 6-player action is certainly one worth watching. KingsofCO have captured some footage direct from the show floor, showing off Chang Koehan‘s ‘Climax Move’; it’s certainly a comedic display, although it doesn’t do much to hide the game’s undeniably dated graphical style.

Also on display for fighting game fans was Street Fighter V, with the announcement of brand new character and Bison’s new right hand man F.A.N.G sending the community into a frenzy due to his striking resemblance to a plethora of characters, with comparisons ranging from Waluigi to Judge Doom! Outside of the game itself, a range of merchandise was on display, including this fierce-looking statue of newcomer Necalli, videoed by BornFree, flaunting his ridiculously large head of hair for all to see! It’s no Venus de Milo, but it would probably beat it in a fight!