25 Years of Speed – A retrospective on F-Zero

When the Super Famicom released in Japan back in 1990, I hadn’t even been born. Perhaps that’s too personal a way to start a feature looking back at the 25 year legacy of a groundbreaking racing game that helped send the Super Famicom off with a flying start, but I wanted to give some perspective to how long it has been since this title first graced the minds of gamers in Japan and later, across the world. 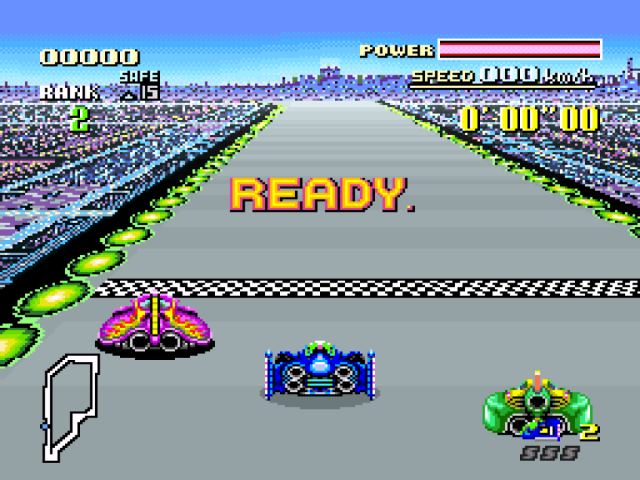 In some ways, F-Zero‘s existence as a title is much like that of the fictional flying cars that populate the futuristic racing circuits it features; one based entirely on seemingly miraculous technological advances. Imagine the player who has just come home with their brand new Super Famicom on launch day, 21st of November 1990. Picture the scene as they boot up their new game cartridge, a racing game titled ‘F-Zero‘, for the first time and watch the camera pan down on the chequered starting line that not only marks the beginning of what is potentially the most death-defying Grand Prix to ever be conceived, but what will likely be the fastest and most high-octane gaming experience of their lives.

The year is 2560. Before them lies the sprawling metropolis of Mute City, a truly marvellous city of the future, but one soon to become afterimage left in the dust. The player waits in anticipation, watching the vehicles gently lift above the track, their boosters flaring with a seemingly impatient longing to explode from the starting line and hurtle into the distance. The countdown begins… Three… Two… One… Bam! The roar of the engine takes hold as the machine screams down the track, the sparkling lights of the city nothing but a blur as the vehicles do battle, snaking around one another in a beautifully coordinated chaos of destruction and adrenaline. The only thing that pushes its way above the grating buzz of whirring machinery and racers hurtling past one another at 400km/h is the thumping sounds of 16-bit rock, urging you to push that speedometer just a little bit higher, to turn those corners just a little bit faster. One false move and your machine is nothing but a anomalous fireball of death, a mere afterthought in the mind of your racers. There’s only one thing on their minds; victory!

Maybe this sounds like something you’d read on the back of the game’s box, but I feel it’s a solid way of putting the experience F-Zero aims to capture into words. Of course, by today’s standards where realism is the norm, F-Zero would fall short in every aspect, but it’s crucial to remember this title’s importance as a launch title for the Super Famicom. When thinking back to the 8-bit, low colour experiences that were possible on the Famicom and then considering the transition between systems, it must’ve become clear that both Nintendo and gaming as a whole were heading in an incredible direction if things like this were possible. Of course, it’s also important to remember that arcade gaming had advanced much further by this point, with the likes of Super Hang-On and Out Run already taking pride of place in arcades across Japan. But to get an arcade-accurate experience in your living room? Well, that was something else.

And it’s for this reason F-Zero was the perfect showcase for what the Super Famicom could do. For starters, it made use of the brand new “Mode-7” technology, which offered a faux-3D effect like nothing else before it. Now the beautiful and sprawling cities and hostile planet surfaces that lay in wait under the racetrack as a tomb for any careless drivers who find themselves leaving the boundaries of the tarmac that normally would have gone unnoticed could help to create a truly dynamic display of the speed and scale of F-Zero‘s futuristic races. Advance sprite scaling gave the genuine appearance of racers leaving you in the dust, fading into mere dots on the horizon as they slam down their pedals and slip ahead of you. And to think that what it showed off was only a taster of what was to come!

F-Zero didn’t just set the benchmark for Super Famicom games, but for the entire racing genre; it breathed a new lease of life into a genre had stagnated slightly during the Famicom era due to a more unrealistic presentation of the sport (likely as a result of technical limitations), a genre dominated by the arcades that had yet to find its place in the home gaming circle. The creation of this dazzling new sci-fi racer established a whole new sub-genre in itself, one that would go on to inspire the likes of Wipeout and to use a more contemporary example, Shin’en’s Fast Racing Neo. From this point on, it was safe to say that almost all racing games would carry a little piece of F-Zero‘s conceptual innovation with them; even future beloved Nintendo titles such as Super Mario Kart would be crafted by and expand upon F-Zero‘s groundbreaking technological display.

One element of F-Zero that I feel can’t go unnoticed is the soundtrack. Whilst countless remixes of the classic Mute City theme across Smash Bros‘ various incarnations have seasoned everyone towards fast paced rock or metal variations on classic F-Zero tunes, many tracks from the original go forgotten. Track themes such as Death Wind, Red Canyon and Port Town are remarkable in their own right and do an awful lot to convey the game’s pace and feel. Even the results theme, which is definitively calm in comparison to its in-race counterparts, fits tremendously well, serving as the perfect ‘cool down’ track after a high-octane battle on the track (also noteworthy is the Staff Roll of F-Zero GX, which pays tribute to the classic results theme in a more grandiose style). The music in the original F-Zero is so upbeat and catchy that an officially licensed CD with jazz and jazz-fusion arrangements of the entire soundtrack has been released by Nintendo. If one thing has lived on in an era where the future of the F-Zero series is dubious, it’s the music.

Of course, it’s not to say that the original F-Zero is a perfect experience; one of the many ways it was trumped by it’s racing game successor Super Mario Kart two years later in 1992 was that it included a much desired multiplayer mode, something that hadn’t been technologically possible with F-Zero‘s intricate track design, according to an Iwata Asks interview with series producer Shigeru Miyamoto. Luckily, the game’s home console sequels F-Zero X (Nintendo 64, 1998) and F-Zero GX (GameCube, 2003) made many improvements, both to the game’s core systems (adding in additional modes etc) and to the game’s feel, with the introduction of 3D graphics working towards perfecting that feeling of sheer speed (some would argue that with the right methods, F-Zero GX can even look as good as a title released in 2015).

I feel that the original F-Zero doesn’t get enough appreciation. In the grand scale of things, it might not be the finest title on the Super Famicom, nor the finest racing title Nintendo have released. However, the many elements it combines to provide a exciting, compelling experience show testament to how this is a game that gets one thing very right; it truly captures the essence of speed, setting the bar for every racing game to follow and in a manner that can still be fully respected 25 years on.

A UK-based appreciator of video game culture with journalistic ambitions. Creator of Minus World.
View all posts by Oliver Jameson →
This entry was posted in Features, Posts, Retrospective and tagged F-Zero, Features, Nintendo, Retrospective, SNES, Super Famicom. Bookmark the permalink.